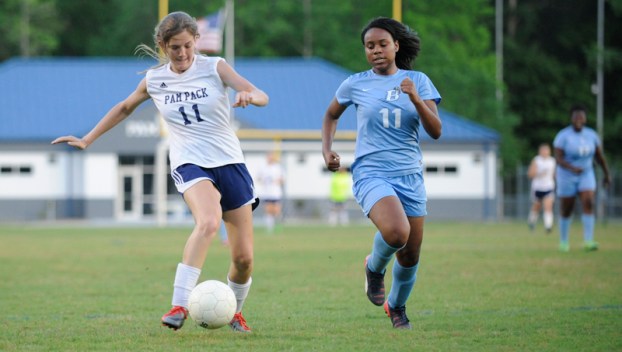 Sydney Walker makes her way toward the goal during a game last season.

JACKSONVILLE — Lilly Frances Lobos and Jordan Prescott each found twine Monday at Northside-Jacksonville to lead Washington to a 3-0 clean-sheet win. It marked a season sweep of the Lady Monarchs.

Sydney Walker assisted on two of the team’s three goals. The Lady Pack scored twice in the first half before adding another in the second.

Washington took both games in the home-and-home set by a combined 7-0 score.

Julissa Perez made four saves for the shutout. Washington hosts Kinston Thursday for its last outing before spring break.

WILLIAMSTON — Northside got a solid round from each of its golfers to scoot past a tough Riverside club in Monday’s 1-A Coastal Plains Conference match. The Panthers (182) placed first. They were trailed by Riverside (187) and Southside (200).

Northside’s Braeden Cooper and Southside’s Luke Matthews each shot a 43 to finish tied for second, individually. Bryson Radcliffe (44), Dustin Boseman (46) and Clark O’Neal (49) all turned in strong rounds to help the Panthers to the win.

Trey Branch shot a 47 for the Seahawks.

BELHAVEN — Reagan Stoop struck out 16 batters as Pungo cruised past Albemarle, 5-1, on Monday. She allowed just two hits and five walks in the victory.

Offensively, the Lady Raiders had Riley Cutler go 2-for-2, and Ashley Spencer pushed across a pair of runs. Stoop also chipped in with an RBI, as did Emma Williams and Emily Spencer.

Defensively, Matthew Bullock spearheaded the win as he manned the mound for two innings. UCA’s Hunter Moore tossed a game-high three innings and struck out a dozen batters.

GREENVILLE — Washington made the short trek to Greenville Monday for a non-conference test against Rose. The Rampants — undefeated... read more