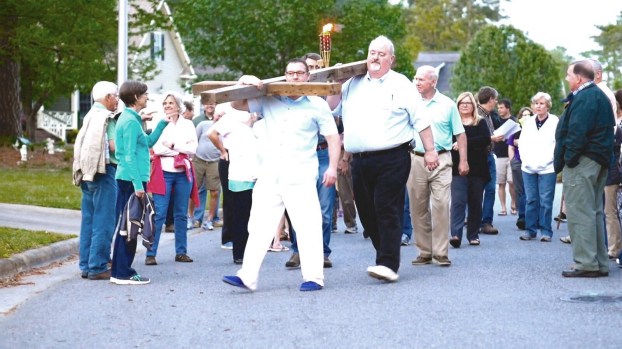 Walk to the Cross set for Good Friday

Last year’s Walk to the Cross in a Washington neighborhood was such a success that it’s being repeated this year.

The second-annual Walk to the Cross begins at 7:30 p.m. Good Friday (March 30) at 107 Bath Circle in the Smallwood neighborhood in Washington. At 8 p.m., a torch service begins at 110 S. Eden Drive in Smallwood. The rain date is Saturday. Participants should wear comfortable walking shoes and bring flashlights.

Walk to the Cross is the result of regular meetings of three clergymen who live in Smallwood, according to the Rev. Jim Pegan, pastor of missional discipleship at First United Methodist Church in Washington.

Pegan said that discussion resulted in “weaving” scripture and an outdoor event moving through the neighborhood to “sort of recapture” what it must have been like for Jesus in the last hours of his life on Earth. “So, we got to thinking about it and we put together a little 1-mile route that took us around Smallwood and ended up at the community lot that’s there in Smallwood. We put the word out that we were going to do that. We invited some other of our neighbors we knew were in leadership in their churches like Greg (Barmer, senior pastor at First Baptist Church in Washington). He quickly got on board,” Pegan said. “Tom Johnson from Young Life got on board quickly with that. We didn’t know if anybody would be interested, but we put the word on the Smallwood Facebook page.”

Pegan said Walk for the Cross began not as an event sponsored by churches but as a community worship experience. “We did it. I think there were about 150 people who showed up last year, just by word of mouth. That went over so well that we decided we’d give it another shot this year and maybe put the word out a little bit more,” Pegan said.

Barmer, senior pastor at Washington’s First Baptist Church and who lives in the neighborhood where the walk takes place, said he expects members of his congregation to participate in the spiritual stroll again this year. “We had about 20 people participate last year,” Barmer said.

Pegan said Walk to the Cross organizers sought a permit for this year’s event. That did not happen with last year’s walk, he said.

“We had 150 people walking in the dark through the streets in Smallwood carrying torches. It caused a little bit of a disturbance. So this time, we’ve asked for that permit and receive that. This year, the police are going to be escorting us, which will be nice,” Pegan said.

“Everybody’s welcome. You don’t have to live in Smallwood to be a part of that,” Pegan said. “We’re literally carrying a cross through the streets of Smallwood, and we’ll end up having a communion service at the end.”

Other communities call similar events Cross Walk, Walk of the Cross and CrossWalk, with most of them taking place Good Friday.

During its meeting Tuesday, the Washington Planning Board is scheduled to discuss amending the city’s zoning regulations to allow mining... read more