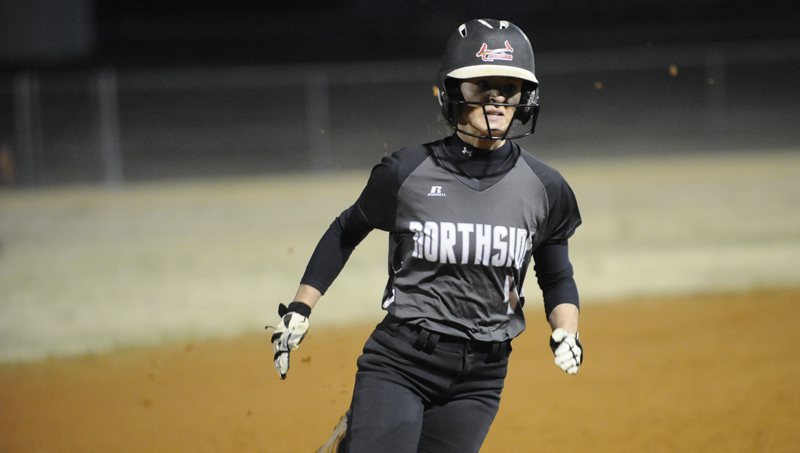 Rylie Newman darts to third base in the first inning of Northside’s win at Southside.

CHOCOWINITY — Danielle Ruffin led off the bottom of the fifth with a single back up the middle. It glanced off the glove of Northside pitcher Madison Braddy, and while it had little impact on the game, it did break up the perfect game the sophomore Lady Panther had masterminded.

Braddy set down the next three batters, sealing Northside’s 15-0 win on enemy territory. It was a dominant performance in which the Lady Panthers put bat to ball, and Southside struggled to make the plays when opportunities were there.

“We played our defensive correctly, and our pitching was spot on,” Northside coach Gil Robbins said. “It was a good game all around for us. … Perfect games are hard to find. It didn’t hurt my feelings at all.”

With the win, Northside has emerged victorious in its first three 1-A Coastal Plains Conference matchups. The Lady Panthers have won all three — the other two being against South Creek and Tarboro — by a combined 38-2 score.

Southside’s loss marks its second straight in CPC action. It also fell 19-0 at home to Riverside. That said, disrupting the perfect game was a point of pride for the Lady Seahawks.

“I thought that, hopefully, we could hit (Braddy). It was good that we did that and got on base,” Southside coach Kam Rouse said. “I would have liked to get a run, but I’m glad we at least got a base runner.”

Northside came out firing in the top of the first. The aggressive approach at the plate got Rylie Newman and Savannah Slade on with no outs, and the same mindset on the base paths helped the Lady Panthers score at will.

They ended up plating three in the first frame. Two of them came off the bat of Kaitlyn Spain. Northside chalked up a pair of two-out runs. Newman and Slade stole bases to put themselves in position to extend the lead to 5-0.

Meanwhile, Braddy was setting down every Lady Seahawk to take the plate. She fanned all three she faced in the first. Then two more in the second. And another two in the third. She fanned eight in total.

Northside blew the game wide open with nine runs in the top of the third. Plenty of Southside errors opened the door for the visitors to pour it on. Brooklyn Hudnell sent a two-RBI base hit back up the middle to get its started. Newman, Slade, and Teagan Pilgreen all pushed across runs, too. 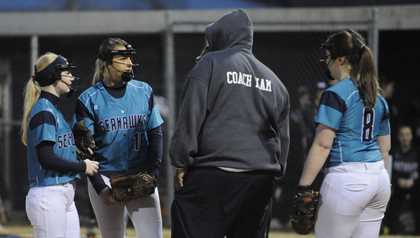 Southside coach Kam Rouse calls for a pause to calm down his infield.

The frame came full circle when Hudnell stepped up and belted another RBI knock to make it 14-0.

Cameron Rose and Rylie Norman had back-to-back hits in the fourth to put two in scoring position. Taylor Chase plated Rose to make it 15-0.

Northside travels to Jones Senior Thursday, and Southside will journey to South Creek.