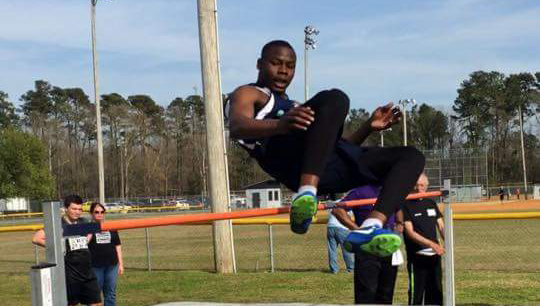 Freshman Jaheem Carter flies over the bar in the high jump on Thursday. He won the event with a 5-foot-4 leap. (Andrea Quinerly/Contributed)

PINETOWN — Southside dominated Thursday in its 1-A Coastal Plains Conference meet at Northside. The boys finished first with 94 points. They were trailed by the Panthers (58) and Tarboro (20). The Lady Seahawks (108) flew past Northside (52) and Tarboro (14).

Seahawks coach Andrea Quinerly cited Jonquil Haywood and Jacqueline Wood as leaders for their respective squads. Haywood is one of the region’s best in the 400-meter run. Wood is one of the top in the east in the 100 meter.

Southside also boasts defending 1-A long jump champion Eminey Redmond. Nataziyah Wishop and Nakeyah Johnson have been important, as well, and a bevy of younger athletes have stepped up for both the boys and girls.

CHOCOWINITY — Unity’s softball team stayed in form this week with a two-game sweep of North East Carolina Prep School. It dominated the first game, 10-1, and hung on for a win in the second, 12-10.

Lilly Wallace had a straightaway home run to centerfield in the first outing. Unity’s bats, which were hot all day, also had Grace Bumpass, Macy Main, and Grace Rose chip in with two hits apiece.

Chloe Boyd picked up her second win of the season as she struck out 10 batters in five innings.

KK Coltrain and Bumpass combined for three homers in the second win. Bumpass was 5-for-7 between the two games.

Unity led the entire game, but walks and errors, coupled with timely hitting allowed NECPS to stay within reach. Main earned the win to improve to 4-0. Boyd took over for the final two outs, and with the tying runs on, struck out another two batters. That brought her day’s total to a dozen.

Unity will return to action April 9 against Bethel Christian.

CHOCOWINITY — Southside piled it on North Lenoir Wednesday night. So much so that, despite conceding a goal late in... read more