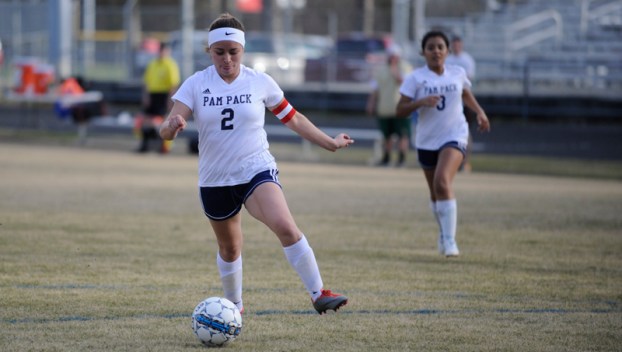 Maricela Gutierrez aims for the goal Thursday against Kinston. She had two goals.

Washington will coast into spring break after demolishing a shorthanded Kinston team, 9-0, Thursday. The two teams played 7-on-7 due to the fact the Lady Vikings on had seven on their roster.

Kinston did well to stymie the Lady Pack early on. However, with the visitors unable to make substitutions and Washington making six-player swaps every seven or so minutes, it was only a matter of time before the Lady Pack took complete control.

The home side missed about a half dozen scoring opportunities in the first 15 minutes before Madison Black put the Lady Pack on the board. Her shot trickled right in for the first marker.

Still, the chances continued to pile up, but Washington’s forwards struggled to bury them. There may have been an adjustment period for the players as they’re used to competing with 11 girls per team. Perhaps the approaching vacation coupled with a winless opponent made for a mental hurdle.

Still, coach Ed Rodriguez wants his team to be ready to roll for every game.

Alyssa Villegas made it 2-0 in the 22nd minute when she cleaned up Rebecca Zerniak’s rebound. Washington hit its stride just before halftime. An own goal sandwiched between a pair of strikes from senior captain Maricela Gutierrez turned it into a 5-0 advantage in the last few minutes of the half.

Four more Lady Pack players found twine in the first 11 minutes of the second half. Senior Sydney Walker put one in from point-blank range, and fellow veteran Maddie Brodie put a free kick in the net a minute later. Zerniak scored on a rebound in the 51st minute to push the lead to 9-0 and enact the mercy rule.

“We had six sick,” Rodriguez said. Washington wasn’t as thin as Kinston, but was still missing some important pieces. That included leading scorer Lilly Frances Lobos. Four of the team’s goals came from underclassmen.

“Like everything else, if you do the right things, you can do part of this. You can make contributions. Find a seam, then when they commit, make a pass. These are the things we talk about: fundamentals.”

Washington lost its second-leading scorer Jordan Prescott to an ankle injury in the first half. She had to be carried to the bench and remained there for the remainder of the game.

“It wasn’t that hard a play. It was just an unfortunate thing,” Rodriguez said. “Hopefully it’s just a bad sprain. We’ll have some time off for her to heal it.”