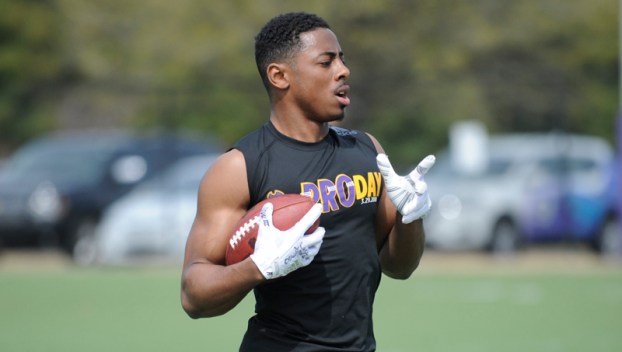 Jimmy Williams makes a catch during the skills exhibitions at ECU’s pro day.

GREENVILLE — Jimmy Williams was happy with how Thursday’s pro-timing day went at East Carolina. It was an event Williams has been preparing for since ECU’s season came to an end back in November.

The training began shortly after a lopsided loss to Memphis, but the vision began a long time ago. The Washington product and standout Pirate wide receiver has dreamed of a professional football career for as long as he could carry a ball.

Thursday was his opportunity to impress the spattering of NFL scouts in Greenville, and he feels like he did just that.

“I felt like I met all of my expectations, and exceeded some of my expectations. It was a good day for me,” Williams said. “It was about being my best, and (Thursday), I feel like I was at my very, very best.” 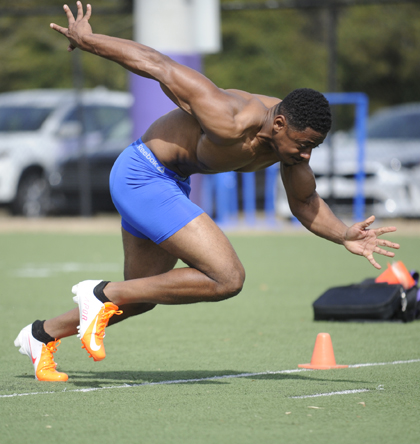 Jimmy Williams takes off for his second shot at the 40-yard dash.

So much went into the few hours Williams spent with scouts on Thursday. He’s worked to improve in the areas he’d be measured: 40-yard dash, shuttle drill, three-cone drill, weight lifting, and more.

Williams took the mental aspect into consideration, too. Pro day can be a different animal for some athletes. It’s unlike practice in that there’s little feedback, and chances to execute are few.

“Before you get out here, you prepare for people staring at you. You don’t know what they’re saying or what they’re writing down,” Williams said.

The one-time Pam Pack quarterback said he felt some of his best showings came in the skills demonstrations: running routes and making catches. The only ball he missed was a deep toss by Thomas Sirk, which was the last throw made to him.

In the weight room portion, Williams also said he did better than he expected with his jumps and bench press.

“What I put out here, that was the best that I have. I feel like I did that all day long,” Williams said. “There’s nothing I could have done better.”

Getting through pro day, and believing he left it all on the field, is a weight off his shoulders.

“I came out and had a good day, and that takes even more weight off my shoulders,” Williams said. “The anxiety, all that is lifted off of you. … I really just had a little swag about me. I joked with the guys and carried myself around comfortably. That was the main thing.”

From here, Williams hopes to have earned some private workouts. He said his training will shift from focusing on combine drills to getting back in football shape.

“Now it’s just football stuff,” he said. “Get ready for, if a team picks me up, I want to be in shape and ready to go once the camp starts. Just really honing in on my football stuff now.”

GREENVILLE — Washington made the short trek to Greenville Monday for a non-conference test against Rose. The Rampants — undefeated... read more