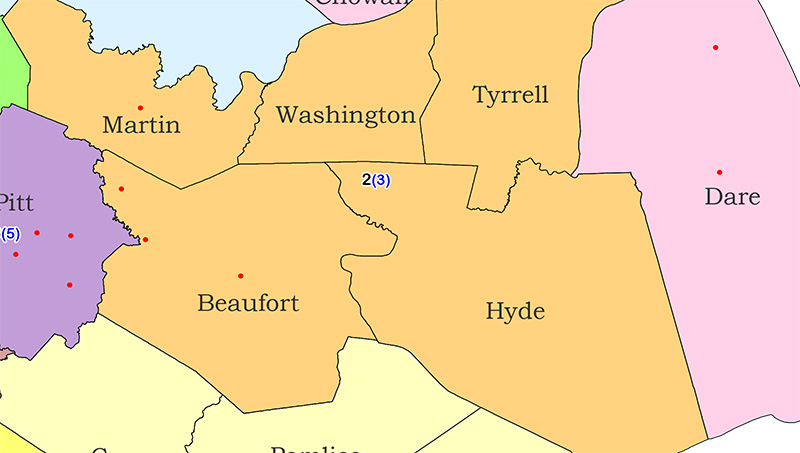 The 2nd Judicial District, which includes Beaufort County, could see a reduction in District Court judges, something that’s being considered by a joint committee in the North Carolina General Assembly.

A decision on one of those options — or an option not yet developed — could come in the legislature’s short session, which begins in May.

“Judicial redistricting is necessary because the maps haven’t had a comprehensive look at them since the original Bell Commission met over 50 years ago. There’s been patchwork, changes here and there that were based on politics and not necessarily the needs of the state or the judicial system. So we’ve moved now from originally where district attorneys, Superior Court districts and District Court districts were roughly overlapping. Now there’s been a lot of areas of the state there’s no overlap left,” said Neal Inman, spokesman for Rep. David Lewis, a Republican member of the joint committee who’s been vocal about the need for change. “So there’s real need to go back and align with the original intent to have those districts overlap and also update the map for changes in population and workload needs. That’s what the judicial redistricting and reform committees have been taking a look at over the last almost year now.”

Inman said he believes the jury is still out when it comes to which redistricting plan Lewis or the General Assembly will support.

“Rep. Lewis has not actually voted on any plan since the original bill passed the House last year. The committee is simply at this point taking a look with the Senate at various proposals. There are several now out there. I don’t think he would support or oppose any of the specific plans at this point because it’s just in a discussion mode,” Inman said. “People are taking input from stakeholders and local representatives and examining data that we get from the Administrative Office of the Courts. I don’t think like there’s an endorsement of any particular plan from him.”

Inman said the judicial redistricting effort “is a work in progress.”

If the 2nd Judicial District loses a District Court judge, that won’t sit well with some people.

“The Second District (which is comprised of Beaufort, Martin, Washington, Tyrrell and Hyde counties) has had four judges since Regina Parker was appointed by Governor Hunt in January 2001. We needed a fourth judge then because our workload had increased, and we need at least the four judges we have now, as dockets have only gotten longer for cases of all kinds over the last 17 years. Any attempt to eliminate one of our four judges is partisan, foolish and short-sighted,” wrote Jason Williams, a Washington attorney, in an email.

Williams continued: “My understanding is that the General Assembly is basing their decision to eliminate judges on a time-study commissioned by the Administrative Office of the Courts which measured the time judges spent actually sitting on the bench. That is not, however, an accurate measure of anything in my opinion. First, the business of the court is often done prior to a judge taking the bench, during recesses or lunch breaks, or after court is adjourned for the day. Second, other things are more important than the time a judge sits on the bench, such as the volume of cases that come before the court, or, in our district especially, the size of the district geographically.”

Seth Edwards, district attorney for the 2nd Judicial District, opposes reducing the number of District Court judges in the district.

“I consider myself fiscally conservative. I don’t believe in the waste of state resources. That being said, it would be very detrimental to our five counties if we lost a District Court judge,” Edwards said. “My reasoning for that is the Second District, I believe, is the largest geographical judicial district in North Carolina. It has more square miles in it, I’m told, than any of the other districts. … We don’t have the population or number of cases that a Raleigh or a Durham or Greensboro, Charlotte, Wilmington would have. We just have to travel a lot to go to courts from one place to the next. So, we’ve got to have judges available in all of these counties.”

Edwards said there’s more to consider than just the criminal courts. “It’s the civil courts, domestic, ex parte orders for custody, all of those kinds of things. I would be against losing a position.”

Other critics of the proposed reductions contend they would provide Republicans a disproportionate share of seats on the bench and would eliminate as many as half the sitting black judges.