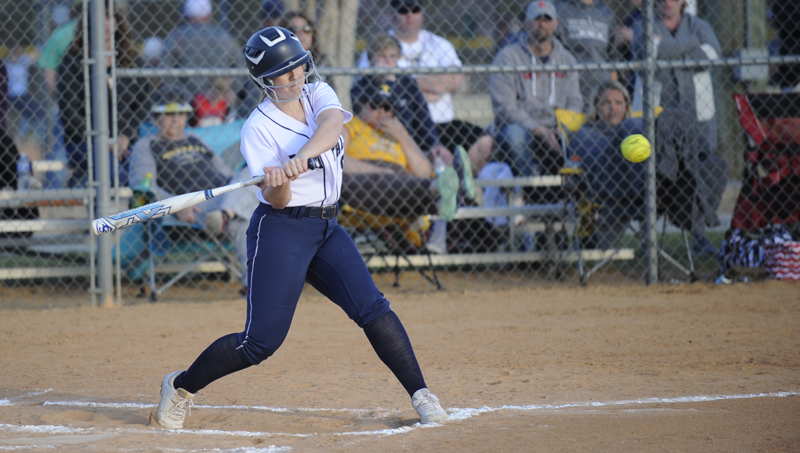 Kaylee Elks sees the ball to her bat as she launches a first-inning grand slam on Saturday.

WINTERVILLE — Washington’s Easter weekend didn’t end how it would have liked. Kaylee Elks’ first-inning grand slam gave an undefeated Lady Pack club the jump on a talented 3-A team in Topsail.

Washington had built an 8-1 lead by the bottom of the seventh. That’s when the Lady Pirate bats ignited and they scored eight-straight runs to upend the Lady Pack, 9-8.

It marked the team’s first loss of the season. It previously endured an 11-inning game at South Lenoir and clipped Midway, 3-1, in its Easter tournament opener.

But all good things must come to an end. After eight wins in a row to open the season, Saturday marked the Lady’s Pack’s first loss. However, Washington remains at the top of the 2-A Eastern Carolina Conference. At the end of the day, a conference title and the favorable playoff seeding that comes with it is the most important.

“We’ve been playing strong. I’m extremely pleased with everything we’ve gotten out of this weekend,” coach Doug Whitehead said after Saturday night’s loss. “We got some quality teams that we played. … The girls weren’t sure if there was any way we’d compete with Topsail. 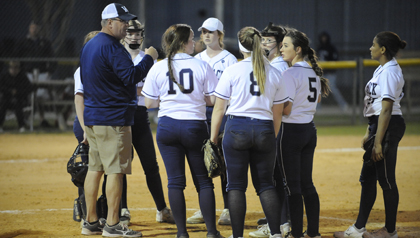 Coach Doug Whitehead calls for a timeout as the flood gates opened and Topsail rallied from down 8-1.

That they did. The girls loaded the bases with two outs when Emme Davis and Abbi Tucker drew walks and Grace Lassiter reached on a fielder’s choice. Elks then stepped up and cranked a shot over the fence in left field to give the Lady Pack a 4-0 lead right out of the gate.

Davis and Lassiter were each issued walks in the top of the third to kick-start a three-run stanza that pushed the advantage to 7-0. The two moved into scoring position thanks a bunt from Tucker. Elks’ bunt went for a base hit while plating Davis. Lassiter and Elks both came in on passed balls.

Topsail tacked on a run in the bottom of the second. Other than that, though, the Lady Pirates struggled to solve Tucker’s pitching and the stout defense behind her.

Washington came a bit unraveled in that seventh inning. Topsail’s bats came to life all of a sudden. Hits were finding gaps and, in the blink of an eye, Topsail erased its seven-run deficit to walk off with the win.

“I’m very tickled with everything we did. We’ll give them a long break, come back, and jump into conference that Tuesday,” Whitehead said. Washington returns to action next week against West Craven.

If anything, this loss could be beneficial in the long run. It could serve to ground the Lady Pack after an undefeated start. The coaching staff isn’t concerned about whether or not the team will be able to move past this.

There is no reason to worry, either. This team has seen success, and more importantly, the work it takes to achieve that success. The break will give Washington time to put this first loss in the rear-view mirror.

“They’re just a good support group with each other. They’re happy. They get along well,” Whitehead said. “It’s a hoot riding the bus with them. During warm ups, they’ll play music and dance. They’re supporting each other.”