Dooley aiming to compete right away 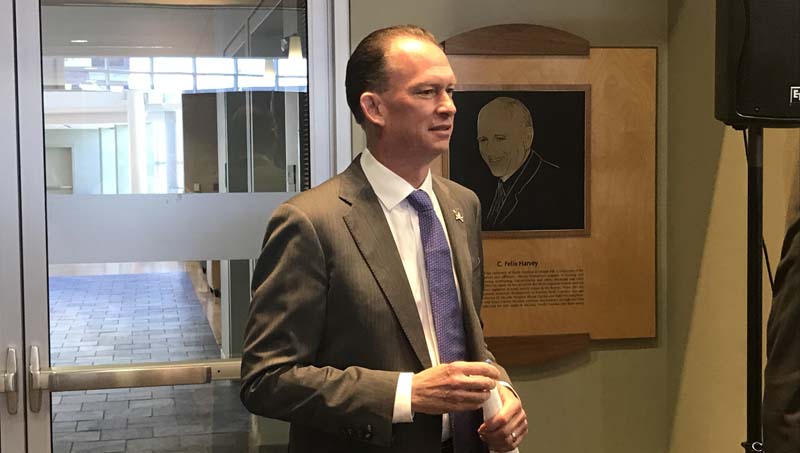 GREENVILLE — New East Carolina basketball coach Joe Dooley reportedly told the Pirates to have their ring sizes ready. The message when he met with the team Wednesday evening after signing a five-year contract was that ECU will compete in the American Athletic Conference and beyond.

“One of the big things is if you’re not in it to win, don’t play,” Dooley said on Thursday. “I think with our guys, it’s a challenge. Keep challenging them to do things that raise the level and expectations. I think we’ve got to give our guys some confidence.”

It will be a challenge. Dooley was an assistant on the 1992-93 team led by Eddie Payne that made the program’s only appearance in the NCAA Tournament. A lot has changed since then, though. The landscape of the game is different, and so is ECU’s place in it.

The Pirates played in the Colonial Athletic Association then. Now they’re a member of the AAC, which is one of the nation’s stronger basketball conferences.

“It takes a little bit of figuring some things out,” Dooley said. “We want to compete. We want to get better daily.”

Family also played a part in the decision for Dooley to return to Greenville. His 14-year-old son isn’t very familiar with ECU from when his father’s stint at ECU that ended in 1999. However, Dooley’s parents still live in Greenville, and he said his family came to stay with his parents when Florida was evacuated during Hurricane Irma last year.

Dooley said his son was impressed when he got a look at the facilities around Greenville.

“He’s already packed his sneakers. He’s ready to get to practice so he can start working so maybe one day he’ll be good enough to be a Pirate,” Dooley said. “Or at least walk on.

“I was shocked when we walked through the facilities. We have some advantages we didn’t have in the past. … We’re excited about it. I think what you’re going to see is a bunch of guys that are going to compete at a high level.”

Dooley also stressed the importance of accountability on and off the court. He said ECU will strive to produce good basketball players, students, and citizens.

Dooley returns to Greenville after spending five seasons at Florida Gulf Coast. He took the Eagles to the NCAA tournament in 2016 and 2017. When Dooley was in Greenville, he took over for Payne in 1995. He amassed a 57-52 record during four seasons with the Pirates.

That included consecutive 17-win campaigns in his first two seasons.

He also spent a decade as an assistant at Kansas. Dooley spoke highly of the atmosphere at Jayhawk games and the advantage it provided the team. He spun that into a challenge to the ECU fans to support the basketball program in a way that would make Minges Coliseum a place where the Pirates would thrive.

Dooley is already off and running with his new job. Among his first orders of business is meeting with players individually and contacting incoming recruits.