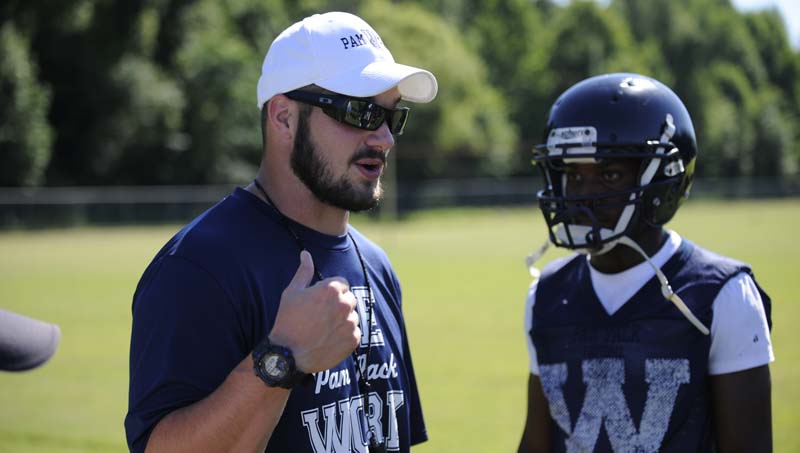 For someone like Perry Owens, early April is the greatest time of the year. Any professional wrestling fan would agree with that.

WrestleMania has grown into pro wrestling’s equivalent of the Super Bowl. What started as a standalone event has grown 33 years later into a weeklong celebration of the sport-theatre hybrid. The WWE hosts a bevy of shows — obviously headlined by Sunday’s WrestleMania show. Many other wrestling promotions follow with marquee events of their own. It will all be emanating from New Orleans this year.

For Owens — just like so many other fans — wrestling is something he fell in love with at a young age.

“In my house, we grew up poor with several cots in one room. But in that one room was a TV,” Washington football’s offensive coordinator recalled. “I grew up with my dad watching the NWA (National Wrestling Alliance) and Dusty Rhodes. I got into it and, as a kid, I thought it was real.”

Well, at that age, Owens couldn’t stay up all night watching WCW — the side with which he aligned for the Monday Night Wars. He was allowed to stay up late enough to catch the first few matches on Monday Night Nitro, which was WCW’s flagship show.

Many youngsters back then were drawn to the behemoths: Hulk Hogan, The Undertaker, Ric Flair, The Rock, Sting, Goldberg, and others competing for world championships.

Those guys were often on later in the weekly broadcasts. So, Owens was drawn more to the cruiserweight wrestlers that were featured earlier on Nitro.

“My favorite wrestler growing up was Rey Mysterio Jr.,” Owens recalled. “Him and Dean Malenko, him and Eddie Guerrero kicking off Nitro. … I never saw the older guys. I only saw these young, high-flyers.

“That’s how I got into it. My dad introduced me to it, and I fell in love with the cruiserweights and the mid-card wrestling.”

WCW ended up going downhill in the late 1990s before folding in 2001. Owens and his family switched allegiances during that downturn, but it wasn’t WWE they were tuning into. His dad introduced him to WCW.

ECW was the hardcore, edgy alternative to the WWE and WCW. Blood flowed freely, but there was an undeniable charm in the cult-like feel to the promotion.

It wasn’t long before the Owens family started tuning into WWE more frequently. They liked what they saw from the career-defining feud between Triple H and The Rock.

“I know it’s predetermined, but here’s why I watch it. Every once in a while … you get two guys in that ring and you don’t really know,” Owens explained. He said there’s always that rare surprise to look forward to.

And those shocking moments have a habit of taking place at WrestleMania. He’s looking forward to the world-title bout between Brock Lesnar and Roman Reigns. That’s one of those main events where you have two hard-hitting heavyweights that blur the lines between what is and isn’t scripted.

He said he’s also eager to see Charlotte Flair — yes, the daughter of the “Nature Boy” — defend the Smackdown Women’s Championship against Asuka, who hasn’t been defeated since debuting under the WWE’s NXT brand on Oct. 7, 2015.

WrestleMania has something for everyone. Wrestling purists will enjoy the WWE Championship match between A.J. Styles and Shinsuke Nakamura. Fans that crave destruction have a three-team ladder match. Those that enjoy high-flying action have the Cruiserweight Championship match between North Carolina native Cedric Alexander and Mustafa Ali. Tons of new fans that just want to be entertained will tune in to see the in-ring debut of former UFC star Ronda Rousey.

There’s a reason why Owens and millions of others are sucked into pro wrestling from a young age and continue to keep up with it. That’s what this weekend is all about.