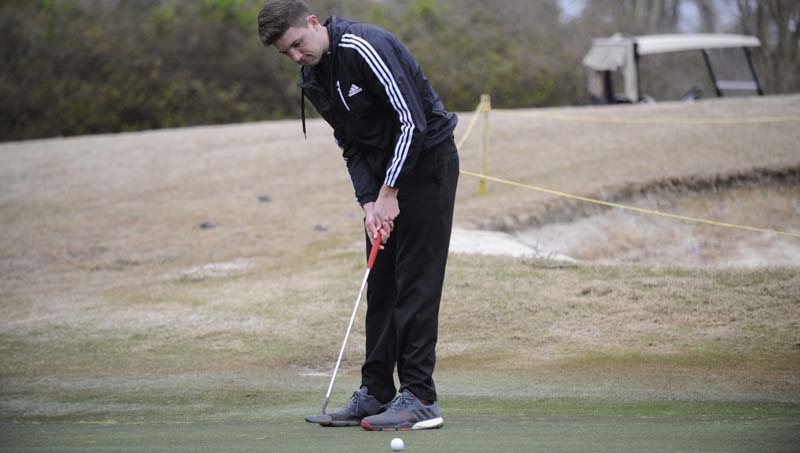 Riley VanStaalduinen measures a putt during a match last week at Cypress Landing.

Washington golf coach Jim Kozuch says his team isn’t as strong as it has been in the past. There are players that have come and gone from teams that ravaged the 2-A Eastern Plains Conference and ranked among the best teams in the east.

That’s not to say the Pam Pack still isn’t raising the bar. Now in the 2-A Eastern Carolina Conference, Washington is still dominating the league. It has topped each ECC foe to step up, and is also perfect in non-conference competition.

“It’s a good start to the year. We’re not as strong as we were the past couple of years,” Kozuch said. “I think we’re about 15 to 20 strokes higher.”

Still, Washington returned one of its leading golfers in Riley VanStaalduinen. He finished tied for 18th in the state at last year’s championship.

“Riley is a mid-70s golfer. Right behind him we have Patrick Lovenberg,” Kozuch said. The others are shooting somewhere in the 85 to 90 range. “We’ve got a freshman that’s been playing well, too: Gray West. He’s in the high 80s, as well.”

Talent is there. Washington has built a sort of dynasty in the east, so the bar set is still a trip to the state championship. That’s the objective.

“We have the goal, obviously, of winning the conference championship again,” Kozuch said. “With Riley, Patrick and John (Hinsley) last year, we were all at the state championship together. Our goal is to get back there.”

The Pam Pack ran away with the 2-A eastern-regional championship a year ago, beating second-place North Johnston by 32 strokes. VanStaalduinen tied then-senior Tony Lovenberg for first with an individual score of 77.

It takes a top-three finish at the regional for Washington to book its return trip to the state championship.

VanStaalduinen has meant more to the team than the score he turns in. He’s an on-course instructor.

“He’s like a second coach,” Kozuch said. “He works with the guys on the range every day. He’s teaching those guys. He’s teaching me. Everything is getting better. Golf is tough.”

Golf is one of the toughest sports from a mental standpoint. It doesn’t make it any easier that Washington hasn’t had a match with nice weather. The Pam Pack enjoyed the lack of wind last week, but still had to deal with the cold.

Those are problems that all its opponents have to overcome, too. Washington has taken it all in stride and still managed to win matches.

If anything, this adversity now should benefit Washington later on.

The Pam Pack returns to the course when it travels to Cutter Creek on Monday.