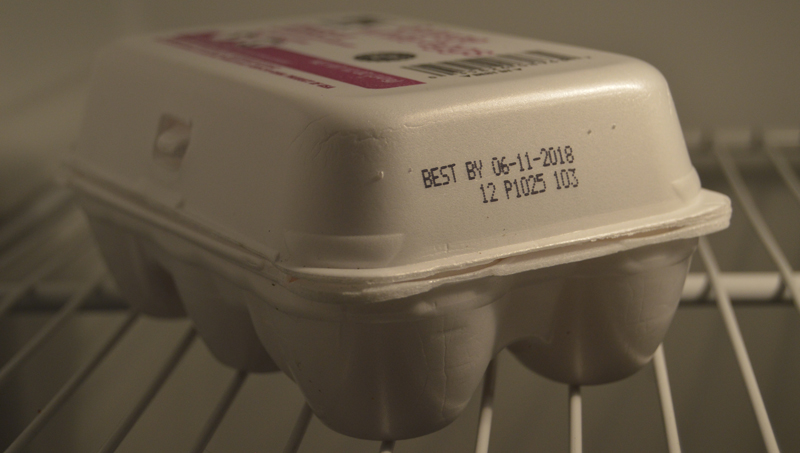 HOW TO TELL: Cartons of eggs affected by the recall are stamped with the plant identification number P-1065, and a three digit Julian date of 011 to 102, representing the day of the year the eggs were packaged. These digits appear adjacent to the expiration date. (Matt Debnam/Daily News)

HYDE COUNTY — 206,749,248 eggs produced at a local egg farm are under recall this week, due to potential salmonella contamination, according to information released by the Food and Drug Administration.

The voluntary recall was a result of some illnesses reported on the U.S. East Coast, which led to extensive interviews and eventually a thorough FDA inspection of the Hyde County farm, which produces 2.3 million eggs a day. The facility includes 3 million laying hens with a USDA inspector on-site daily.

Potentially contaminated eggs were distributed in a variety of locations and under a number of brands, including Food Lion, Great Value, Country Daybreak, Nelms, Crystal Farms, Coburn Farms, Sunshine Farms and Glenview. Some eggs may have been shipped to Waffle House restaurants as well.

As of April 16, 2018, the CDC reported 23 cases in nine states with six hospitalizations and no deaths.

Consumers who have purchased shelled eggs are urged to immediately discontinue use of the recalled eggs and to return them to the place of purchase for a full refund. Consumers with questions may contact the company at (855) 215-5730 between the hours of 8 a.m. to 5 p.m. Eastern Standard time.