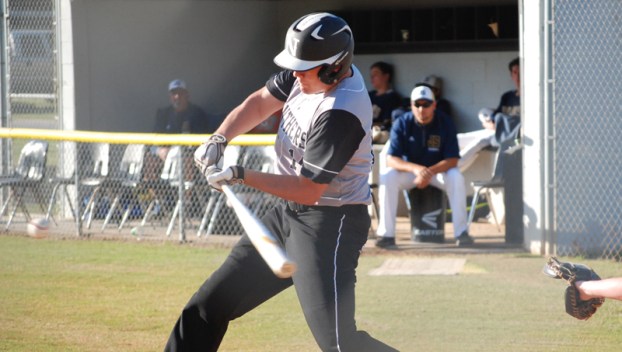 The Panthers honor their graduating players with big win

PINETOWN—Led by its seniors, the Northside baseball team’s production at the plate proved to be too much for Jones Senior Tuesday night, winning 13-0 in five innings in front of a home crowd on Senior Night.

Northside (16-5, 9-2) had a prolific night at the plate, with much of the success coming at the hands’ of its seniors. Of the Panthers’ 15 hits in Tuesday’s game, 13 came off the bat of a senior. Reg Bishop, Zach Woolard, Matthew Marslender, Landon Ormond, Tanner Alligood and Parker Boyd all picked up two hits in the last regular season home game of their high school baseball careers.

The seniors also knocked in most of Northside’s runs as well. The Panthers had 12 RBI against Jones Senior (4-16, 1-9), and seniors were responsible for 10 of them. Marslender and Boyd led the way with three RBI each. Woolard and Dawson Boyd, a junior, also got in on the action, with two RBI apiece.

Northside coach Keith Boyd was pleased with his players’ success with a bat in their hands. With the playoffs looming, the timing of their good play couldn’t be better.

“You get 15 hits, it makes everything easy,” Keith Boyd said. “I think we struck out one time all day. That’s being efficient and getting it done. That’s where we need to start being as we go into the playoffs.”

But the seniors’ contributions didn’t just come with bats in their hands. Alligood got the start, pitching the game’s first four innings. He limited the Trojans to only two hits all game, while striking out three. Fellow senior Alex Waters relieved Alligood in the fifth. Waters had little trouble in his time on the mound, retiring all three batters he faced in 11 pitches.

The Panthers took little time to take control of the game against Jones Senior. After quickly making all three out in the top of the first, Northside went ahead and built a three-run lead when it was its turn to bat. Parker Boyd began it all, hitting a 2-RBI single, bringing home Bishop and Marslender. Parker Boyd stole third before scoring, thanks to a Woolard RBI single, making the score 3-0 Northside. The Panthers went on to score six runs in the third and four more in the fourth inning.

As part of the Senior Night festivities, Zach Woolard was presented with the Bryan Keith Woolard Memorial Scholarship. The scholarship for $700 is awarded in honor of Bryan Woolard, who died in a car crash in 2009. He was the catcher on Northside’s 1994 state championship-winning team.

Coach Boyd enjoyed the fact the seniors had such big games on Senior Night.

“It’s awesome. This has been a great group,” he said. “I’ve been coaching them since they were nine, or watching them play. It’s really fun to see them reach this level.”

The Panthers play their last game of the regular season tonight when they travel to Pamlico County to play the Hurricanes at 6 p.m.