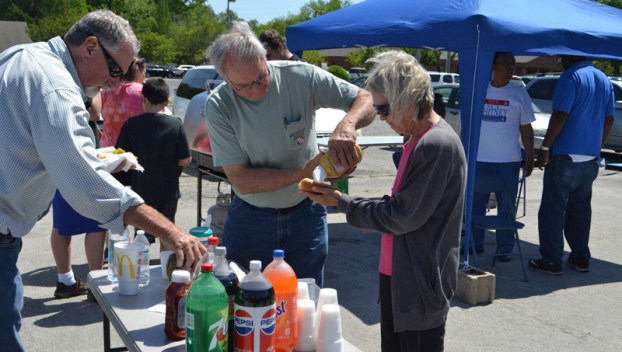 HELPING HAND: A voter squeezes mustard onto another voter’s hot dog at the free hot-dog lunch that four candidates provided outside the Beaufort County Board of Elections office Friday. (Mike Voss/Daily News)

As candidates were electioneering Friday outside the Beaufort County Board of Elections office, they also fed those folks who showed up to vote during the early voting period.

The hot dogs and soft drinks were not being exchanged for votes. The candidates made the clear.

Many of the voters who showed up to mark ballots between 11:30 a.m. and 1:30 p.m. took advantage of the free food, some took just one frankfurter, and others did away with three or four hot dogs. Some elections workers also treated themselves to the nonpartisan wieners.

The participating candidates — Keith Kidwell, Jerry Langley, Al Whitney and Petre Franks — said the cookout provided a nonpartisan avenue for them to give back to the community — specifically people exercising their right to vote and showing support candidates of their choice. The four candidates chipped in to buy the food and other supplies.

Several voters, who declined to identify themselves, said they appreciated the gesture and that the event was a nonpartisan event.

“The motivation was last time in 2014 we did it, and we had a success. So, we felt like we needed to do it again to show that all affiliations can come together and do something positive,” said Whitney, a sheriff’s candidate in the Democratic primary.

“I agree with Mr. Whitney. We decided this had worked out real well in the ’14 run. We reached out to all the candidates asked them to participate, finance and to come together and be here to show we can cross the party lines, we can work within the parties and bring it together as big community in Beaufort County and the 79th District,” said Kidwell, the Republican seeking to represent the 79th District in the North Carolina House of Representatives. “It’s to show the people what the politicians on today’s ticket are all about.”
Petre Franks, another candidate for sheriff in the Democratic primary, said, “This is a great look for the citizens of Beaufort County when all candidates can come together and work for the best interests of the people.”

Langley was not at the event.

“I think it’s a great thing that our candidates can get together on a bipartisan effort for the voters of Beaufort County. They’re out there — they’re not fussing, they’re not fighting. They may disagree on what’s best for Beaufort County, but they all do believe their way is the best way. They’ve got the voters’ interests at heart. So, it’s good to seem the working together, and it shows the public that they can have confidence in their candidates,” said Kellie Harris Hopkins, the county’s elections director.

Today is the last day of the early voting period, with voting beginning at 8 a.m. and concluding at 1 p.m. Voters may mark ballots at the Beaufort County Board of Elections office, 1308 Highland Drive, Suite 104, Washington and three satellite locations — Aurora, Belhaven and Chocowinity. The Aurora site is at the Aurora Community Building, 442 Third St. The Belhaven site is at the John A. Wilkinson Center, 144 W. Main St. The Chocowinity site is at the Chocowin­ity Volunteer Fire Depart­ment, 512 N.C. Highway 33 East.

A community is defined by many things, not the least of which is its health, and the Beaufort County Health... read more