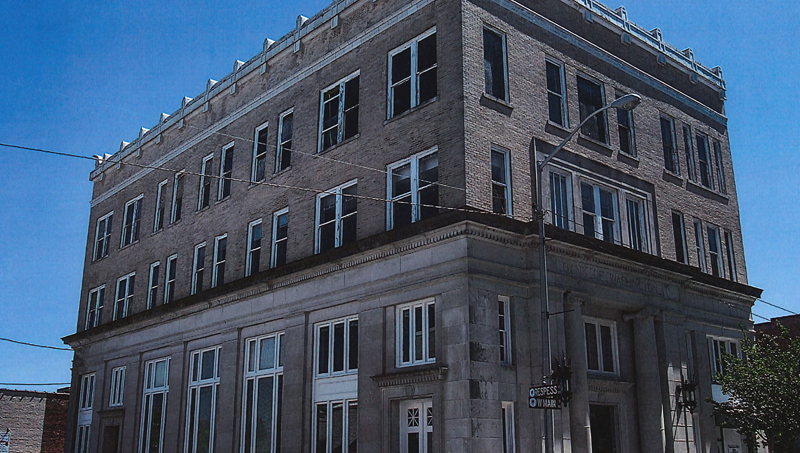 GRANTED: A $200,000 state grant will be used to help pay for the first phase of the effort to convert the former Bank of America building into a distillery, restaurant and boutique hotel. (City of Washington)

The effort to revitalize downtown Washington received a boost this week when a $200,000 grant was awarded to help with converting the former Bank of America building into a mixed-use enterprise.

The grant comes from the Main Street Solutions Fund, an economic-development program within the N.C. Department of Commerce. It will be used to assist The Hackney Distillery LLC (owners Nick and Suzanne Sanders) in the first phase of rehabilitating the former bank building, into a distillery, destination restaurant and boutique hotel. A future second phase, not funded by this grant, will help to construct 14 boutique hotel rooms on the second and third floors.

Nick Sanders, who recently moved from London to Washington with his wife, Suzanne, told the council in December that growth of the distillery and micro-distillery industry is a “global trend.” Sanders said he is ready to commit $775,000 in addition to grant funding to rehabilitate the former bank building. He also said The Hackney Distillery LLC would provide any matching funds the grant agreement would require.

Emily Rebert, the city’s community development planner, said Main Street Solution Fund representatives are scheduled to be in the city next week to help facilitate the paperwork needed to release the grant funds. Rebert said the awarding of the money is good news for downtown development efforts.

“I believe that when you have private investment and public investment coming together, it helps support and promote the downtown, and everyone becomes vested. When everyone becomes vested they care,” Rebert said. “Everyone is coming together like that, you’ll get more investment. You’ll get more people involved. The downtown district, the harbor district are really a driving economic tool for the City of Washington.”

“Anytime we receive what I consider to be leverage funds to do a project from a state agency, it definitely helps the project to move along. In addition to that, it shows our commitment to historic preservation and downtown development,” City Manager Bobby Roberson said. “This is another project, I think, that actually supports eco-tourism for us. That’s been a main thing for me inside the central business district. I think this is a typical example of a project that’ll help eco-tourism for us.”

Additionally, Hackney Distillery LLC is seeking a Smart Communities ElectriCities Economic Development Grant. Such grants require matching funds. Usually, eligible communities receive up to $4,000 in grant funds for projects, but this year they could receive up to $10,000. Washington plans to use a $10,000 grant from the N.C. Commerce Department as the local match required by the Smart Communities grant contract.

“Participants in the grant are eligible to receive matching funds to be used for specific economic development projects. The structure is currently undergoing an adaptive reuse process in order become a distillery, restaurant and boutique hotel,” wrote John Rodman, the city’s director of community and cultural services, in a memorandum sent earlier this year to the mayor and City Council.