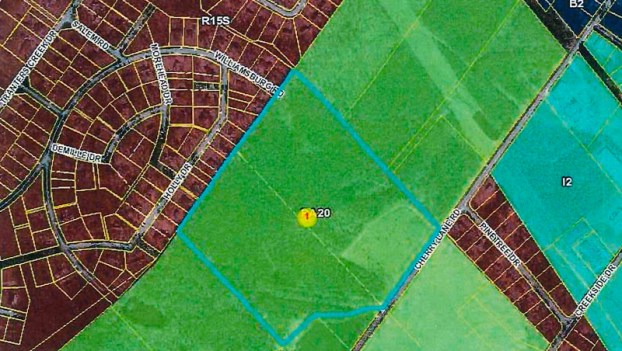 ZONING CHANGE SOUGHT: A sand mine could be located in the area outlined in blue if Washington’s zoning regulations are amended to allow such a use in the RA-20 zoning districts.

Planning Board expected to make recommendation regarding sand-pit proposal

Washington’s Planning Board, during its meeting today, could decide whether to recommend that the City Council amend the city’s zoning ordinances to allow mining operations in RA-20 (residential-agricultural) districts.

The board had been scheduled to discuss the issue at its April meeting, which was cancelled because of the lack of a quorum.

During its March meeting, the board decided it wanted to discuss the request with B.E. Singleton & Sons and its consultant, Harry Bailey, before making a recommendation to the council, which as final say on amending the zoning ordinances. B.E. Singleton & Sons wants to mine sand on a parcel of land on Cherry Lane Road, which is located within the city’s extra-territorial jurisdiction. Roper-based Sly Fox Farm LLC owns the land, which is on the west side of Cherry Lane Road. Fly Fox Farm has no objection to the land being mined for sand.

During their March meeting, board members voiced concerns with mining operations disturbing adjacent residences, increased truck traffic on roads serving the mining site, buffer zones and how long the mine would operate.

Also, the board is scheduled to discuss the draft site plan for a Beaufort County Schools sports complex on Slatestone Road. The complex would be south of Washington High School, according to John Rodman, the city’s director of community and cultural services. The property the school system recently purchased is in the city’s extra-territorial jurisdiction, which is why the proposed soccer-complex project is before the Planning Board.

“We want to make sure the neighbors understand what’s going on. It’s fairly close to a residential section. We’re just giving the neighbors, if they have some concerns that need addressing, a chance to speak those concerns,” Rodman said.

In other business, the board is scheduled to continue its discussion of proposed ordinances that would regulate licensed massage therapy businesses and massage parlors that are associated with adult businesses. The City Council asked the board to research the issue and develop recommendations for it to consider. The board has been working on the matter for several months.

Washington is looking for a new tourism-development director. After 15 years in that position, Lynn Davis has resigned. Davis plans... read more