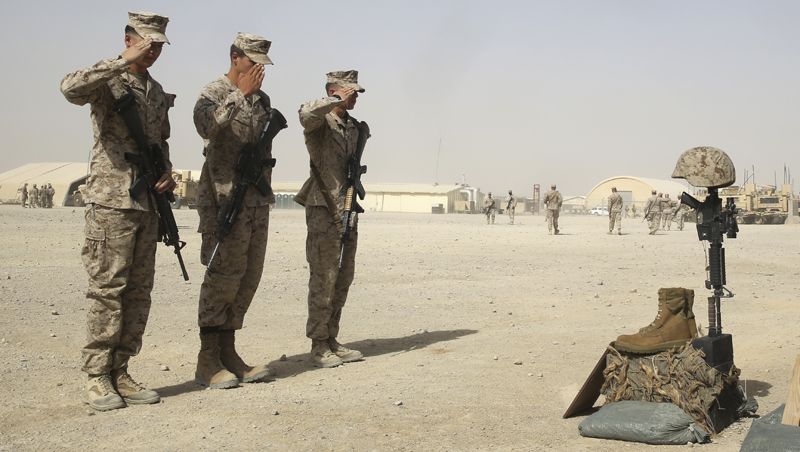 “This year, we are honoring veterans killed in action and veterans family members who are called Gold Star family members. We are honoring them,” said Juanita White, commander of the Beaufort Chapter 48 of the Disabled American Veterans. “We plan on doing the battlefield-cross ceremony and the last roll call ceremony. Our goal and our objective is to teach the community why we do certain ceremonial things to respect our fallen veterans and give them more of an understanding of why it’s done that why and how it’s done,” White said.

The battlefield-cross ceremony is a symbolic replacement of a cross, or marker appropriate to an individual service-member’s religion, on the battlefield or at the base camp for a service member who has been killed.

Joan Hanson, commander of the Beaufort County DAV Chapter 48 Auxiliary, said the service would include the ringing of a bell. “We call out their name three times. Of course, they won’t be able to answer because they’re dead. Then, we’ll ring the bell and tell about that person, to a certain extent.”

Yellow roses will be distributed to Gold Star families, White said. The event, for the first time, will include a first-aid tent and EMS presence, she said.

In Bath on Saturday, the Greater Bath Foundation’s Memorial Day celebration includes a performance by The Embers (6 p.m.) and fireworks on the town’s waterfront (9 p.m.) Food vendors will begin selling food on Main Street late in the afternoon.

As part of the Aurora Fossil Festival, a breakfast and ceremony for veterans begins at 9 a.m. Saturday at S.W. Snowden Elementary School, 693 Seventh St. The Aurora Women’s Club hosts the event.

In Cypress Landing, the Memorial Day parade to honor veterans begins at 10 a.m. and concludes with memorial service at the Bay Club. Veterans should assemble under their appropriate service flags at the golf course parking lot by 9:30 a.m. The veterans will cross Veterans Bridge as they join the parade lineup. A color guard and bagpipers will lead the parade to the Bay Club. After the service, cookies and lemonade will be served.

Spectators are asked to line the parade route from Veterans Bridge to the Bay Club. The event is sponsored by the Cypress Landing Homeowners Association’s Social Committee.