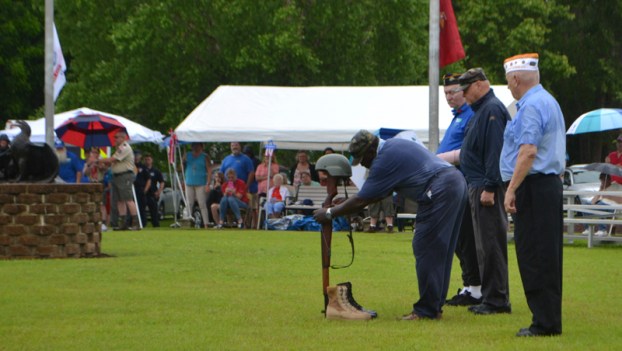 A bell tolled 25 times Memorial Day, once for each of Beaufort County’s war dead since World War I, whose names were called out during a roll-call ceremony.

Under light rain, Gold Star families — who lost family members in the nation’s wars — were honored by the presentation of yellow roses. Veterans made a battlefield cross to honor their brothers and sisters in arms who did not return home because they made the ultimate sacrifice.

Those events and more were part of the Memorial Day service conducted at Veterans Memorial Park in Washington. Beaufort Chapter 48 of the Disabled American Veterans organized the service.

“Like most speakers, I look for an icebreaker to set the tone of the speech. An icebreaker usually is in the form of a joke. As I contemplated what would be appropriate for this occasion, I found myself at a loss. As I thought more about it, there are no jokes when you think of those who cannot utter the simple words of ‘here’ or ‘present’ during roll call. They will never be able to answer roll call again,” said featured speaker Cleveland Bryant Jr. from Cary, a former state DAV commander and a past DAV national executive committee member. “We can and should talk about heroism and sacrifice. It is important, and imperative, to honor … their legacy.”

Gil Alligood, a veteran who was a pilot in the Air Force, was among the veterans of each branch of the military and Merchant Marine veterans who attended the service, talked about what Memorial Day means to him. “To me, it means those that I flew with that didn’t make it back, because I remember them every day. I remember what they did to protect our freedom and let you and I gather here in freedom as we want to do,” Alligood said.

Rudyard Kipling’s “Recessional,” a poem was read during the service. The poem, at the end of several stanzas, repeats the words: “Lest we forget — lest we forget!”

Far-called our navies melt away;
On dune and headland sinks the fire:
Lo, all our pomp of yesterday
Is one with Nineveh and Tyre!
Judge of the Nations, spare us yet,
Lest we forget — lest we forget!

The Gold Star first appeared during World War I after being placed over a service flag’s blue star when a service member was killed in combat. The Gold Star signified the family’s pride in the loved one’s sacrifice rather than the mourning of their personal loss.