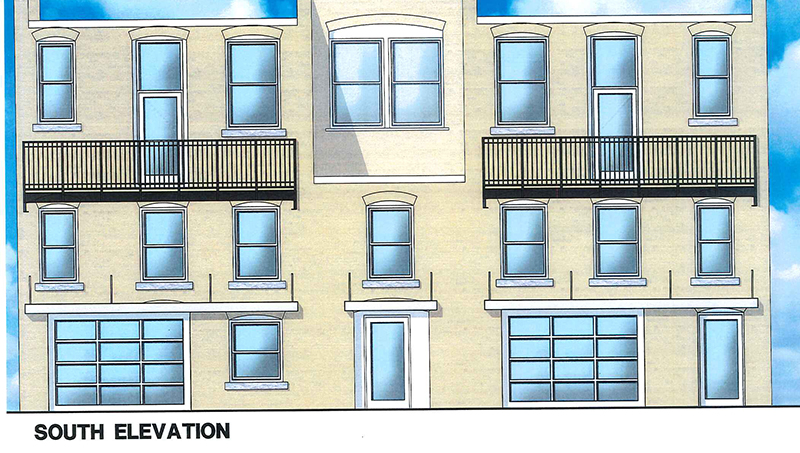 NOW AND FUTURE: S&M Enterprises of Washington LLC wants to modify the former Tassel’s building (photo) into a mixed-use building (drawing) with retail space on the first floor and five apartments on the second floor. (City of Washington)

Emily Rebert, the city’s community-development planner, is cautiously optimistic these two projects and others such as the conversion of the former Bank of America building into micro-distillery, restaurant and boutique hotel could produce similar restoration projects in the future. “That’s the hope. … There is a lot of movement,” she said.

Egli and her husband Stuart plan to use the first floor of the former Tassel’s building as retail space and renovate the second floor so it can house five apartments. “We’ve been trying to recruit breweries and/or restaurants for the retail space, had have several investors check out the building, and the common denominator was ‘water view.’ … All of these prospective tenants asked if we could offer them a more open view to the river, without it, there was very little to no interest in renting the building. That’s why we decided to enhance the back of the building. This way, we could have a fair chance to rent the space, rather than for it to remain empty,” Egli wrote in a letter to city officials.

S&M Enterprises of Washington LLC, listed as owner of the building, proposes the following changes:

Rawls, who lives in Greenville, proposes the following changes to building — owned by 183 West Main LLC — that once house Washington Jewelers:

Rawls said he will provide specifics about plans for the former Washington Jewelers property after the commission’s meeting Tuesday.

There is a project underway to convert the former Fowle Building at the intersection of Respess and West Main Street into a micro-brewery (ground floor) and apartments (upper floors).