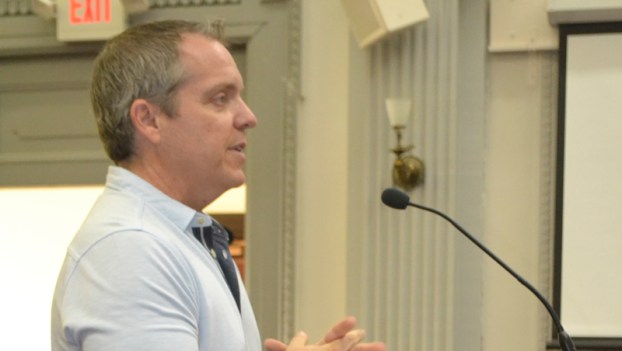 CHANGE IS COMING: Stuart Egli explains the proposed exterior changes to the former Tassel’s building during the Historic Preservation Commission’s meeting Tuesday. S&M Enterprises of Washington LLC wants to renovate the building for a mix of commercial and residential uses. (Mike Voss/Daily News)

Exterior modifications to the former Tassel’s building in downtown Washington are scheduled to occur before the building takes on a mix of commercial and residential use.

During its meeting Tuesday, the Washington Historic Preservation Commission, with a unanimous vote, issued a certificate of appropriateness to S&M Enterprises of Washington LLC so it can make the changes. The renovation plan calls for using the first floor of the former Tassel’s building as retail space and renovate the second floor so it can house five apartments. Stuart and Marita Egli are the principals of S&M Enterprises of Washington LLC.

The proposed changes include the following:

After several visits to Beaufort County, Egli said, he and his wife decided to move from California to Washington. “I transferred my job here. She left her job. We came back, and we put our life savings, basically, into this building. … We put together a really good project, I think, with a really good look. … We’re focusing on the south side for the major changes so we can take advantage of that beautiful view, again, one of the things that brought us back,” he said. “We really want to entice retail space into the back, maybe a restaurant or something similar, and really take advantage of that view on the back side.”

Commission member Kathleen Couch questioned why the project’s plan includes the roll-up doors. Egli explained: “It’s really to open up that restaurant/retail space, and to really take advantage of that outdoor atmosphere, those breezes coming out of that river, to really just open up and change that restaurant experience … and to really bring that indoors.”

Commission members questioned Egli about drawings showing new windows for the building, windows that are level across the top and not arched like the building’s original windows. They also had concerns with proposed balconies on the second floor. Egli and Jamie Dail, with the architectural firm of Dunn & Dalton, provided details regarding the windows and balconies. After receiving those details, the commission members indicated they are satisfied with the project.

Dail told the commission the Eglis and Dunn & Dalton are open to suggestions concerning changes to the building’s exterior.

Commission member Karen Mann’s motion to grant the certificate of appropriateness included the condition that the new balconies and canopies not obstruct — as much as possible — the view of the existing window arches. Egli said he was amenable to that condition.

Washington’s City Council, during its meeting Monday, will consider approving a grant agreement related to the conversion of the former... read more