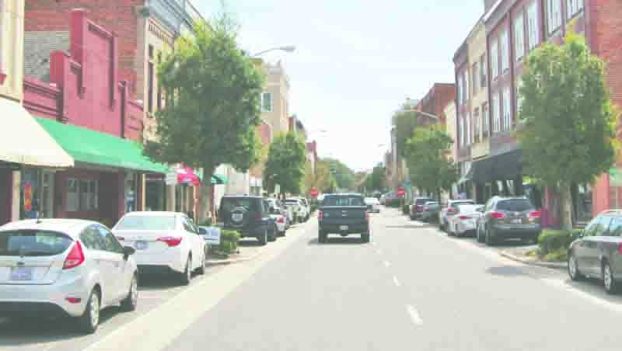 Many of the development- and improvement-related projects in downtown Washington are moving forward because of grant funds awarded to public, private and public-private entities.

Without those grants, those projects would not take place or be substantially reduced in scope, according to city officials.

“Washington’s economic-development organizations, along with city staff, have been very effective in identifying available grants for both new businesses and expansions, or improvements, to existing businesses in our city,” said Roland Wyman, Washington’s newest City Council member. “Grants such as these are often the key factor in the decision to proceed with projects and we are now seeing the results, based on recent news.”

Wyman continued: “Renovated buildings and higher business occupancy means, not only a healthier local economy, but it also enhances our city’s ‘livability’.

“Employers have been hiring a greater number of professionals and skilled workers, many of them in younger age groups and they’ve told us it is important to them to attract employees to a city that offers a vibrant downtown.”

Council member William Pitt believes grants, whether they come from state and/or federal government agencies or private organizations, allow local governments to pay for projects, programs and services they might not be able to do otherwise. “They’re very important, given our Tier 2 status as a poor county. They’re very important. Without large number of partners to work with, the grants are very important to distressed communities such as ours,” Pitt said. “They really are basically the lifeblood of bringing our community back to life downtown.”

The effort to revitalize downtown Washington received a boost earlier this year when a $200,000 grant was awarded to help with converting the former Bank of America building into a mixed-use enterprise.

The grant comes from the Main Street Solutions Fund, an economic-development program within the N.C. Department of Commerce. It will be used to assist The Hackney Distillery LLC (owners Nick and Suzanne Sanders) in the first phase of rehabilitating the former bank building, into a distillery, destination restaurant and boutique hotel. A future second phase, not funded by this grant, will help to construct 14 boutique hotel rooms on the second and third floors.

The effort to bring a brew pub to downtown Washington received assistance in January when the Washington City Council voted to lend up to $500,000 in grant funding to the project developer, New Vision Partners.

The plan is to place Castle Island Brewery in the old Fowle Building at the intersection of West Main and Respess streets. During a council meeting last fall, John Rodman, the city’s director of community and cultural resources, said eight apartments, four on the second floor and four on the third floor, would be part of the overall project. The $500,000 grant represents 71.4 percent of the project’s cost, he told the council then.

The city plans on using a combination of tax dollars, grant funds and possible private donations to implement its streetscape plan.

In April, the City Council approved a proposal to develop a plan for downtown streetscape improvements. Allison Platt & Associates and Rivers & Associates submitted the proposal. The city asked Allison Platt and Mark Garner with Rivers & Associates to prepare a letter of interest and a proposal for work regarding the streetscape design for the section of West Main Street from Respess Street to Gladden Street. Platt/Rivers was awarded a contract not to exceed $20,000 to develop the plan.

The city plans to implement the streetscape project in phases as it finds money for the project’s components — a pay-as-you-go plan. That project includes, but it not limited to, aesthetic improvements such sidewalk upgrades, reconfiguring the intersection of Gladden Street, West Main Street and Stewart Parkway and landscaping. The one-block section on West Main Street runs from Gladden Street westward to Respess Street. The $275,000 in the CIP for the 2018-2019 fiscal year, which begins July 1, does not cover the cost of installing new water and/or sewer lines and other utilities in that one-block section.

Last year, the city was awarded a $94,340 grant, which will be used for enhancements in the city’s central business district, including streetscape projects. The money, awarded by the North Carolina Department of Commerce’s Division of Rural Economic Development, will be distributed this way: $10,000 to Arts of the Pamlico to provide downtown artwork, $30,000 for the city’ façade-improvement program for downtown and $54,340 for streetscape, park improvements and Wi-Fi connections downtown, according to a city document. The City Council and the city’s Historic Preservation Commission would approve all design aspects of such projects.

The city allocated $40,000 of a $50,000 grant for downtown redevelopment to the city’s façade-grant program, with emphasis on the rear facades of buildings that can be seen from Stewart Parkway and the waterfront, and $10,000 for landscaping.