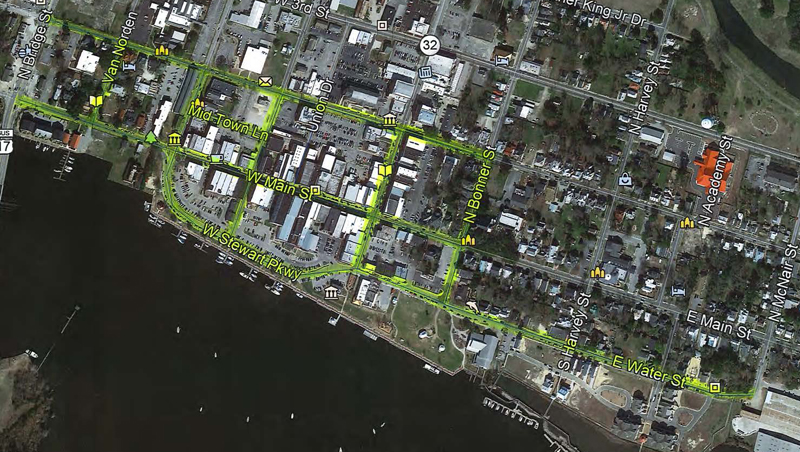 TARGETED STREETS: This map delineates the streets where the new speed limit is 15 mph, which is effective immediately. (City of Washington)

The speed limit on some downtown streets has been lowered from 20 mph to 15 mph effective immediately.

Washington’s City Council made that decision after conducting a public hearing on the matter at its meeting Monday after city staff recommended doing so. The lower speed limit is in effect in the following areas:

The change is the result of studying traffic and parking issues in the downtown area, especially Water Street and Stewart Parkway.

“Lowering that speed down a little bit to 15 mph would allow us, in my mind, to make good, solid traffic tickets, and not just to write a ticket to be writing a ticket. … So, I make that a recommendation for Stewart Parkway,” said Stacy Drakeford, the city’s director of police and fire services, at council meeting earlier this year. He also recommended the 15-mph limit apply Main Street, too.

Lowering the speed limit is one way to address traffic-safety issues in the area of South Market Street, Stewart Parkway and Water Street, Drakeford said. He also suggested the city consider installing “traffic calming devices” such as speed bumps on specific areas of Water Street in an effort to control speeding. Council members expressed interest in the speed bumps, including combining speed bumps and pedestrian crosswalks into one device.

The council has not made a decision regarding the speed bumps.

In addition to the lower speed limit on Water Street and Stewart Parkway, Drakeford recommended the city enact a no-cruising ordinance that would apply to specified areas in the city. Such an ordinance is constitutional, according to Drakeford, who told the council he researched the matter.

The council has not made a decision concerning the no-cruising ordinance.