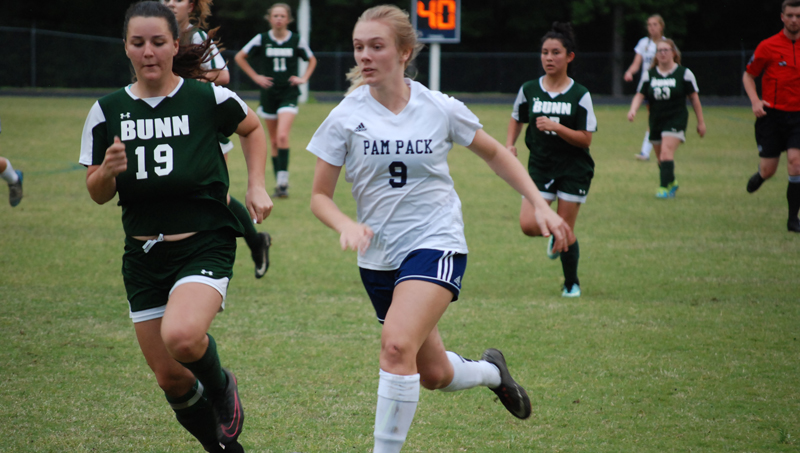 FRESHMAN PHENOM: Washington’s Lilly Frances Lobos dribbles past a defender in the Pam Pack’s first-round playoff game this season. The freshman, who scored four goals and supplied two assists in the 7-0 victory, was named the Player of the Year for the Eastern Carolina 2A Conference. (Sean Finnerty | Daily News)

Washington finished the regular season with a 17-6 record, scoring 134 goals and allowing its opponents to score only 37 times. But the statistics become even more stunning when focusing on games against conference foes.

The Pam Pack finished the 2018 season with a 10-0 record against fellow Eastern Carolina 2A Conference members, outscoring its conference rivals 93-3.

Being top dog in its conference is nothing new for Washington, as it has now won 46 conference games in a row, dating back to 2013. The streak started with the Pam Pack winning its final two games in the Coastal 3A Conference, followed by winning every game (34) it played in the Eastern Plains Conference and now includes the ten games won this season as a member of the Eastern Carolina 2A Conference.

The team’s dominance over the conference earned the team recognition, as six of its players were named to the All-Conference Team, including Lilly Frances Lobos, who was named the conference’s Player of the Year. Washington coach Ed Rodriguez was also named Coach of the Year.

Lobos led the charge for Washington this past season. The freshman winger terrorized defenders all season, racking up 48 goals and 24 assists to lead her team and the conference in both categories. Among the other Pam Pack members on the All-Conference Team are team MVP and midfield lynchpin Anna Frisbie and Sydney Walker, whose 14 assists were the third most in the conference.

Along with having six team members being honored by the conference, Washington also named the recipients of its team awards.

Offensive Player of the Year:

Defensive Player of the Year: