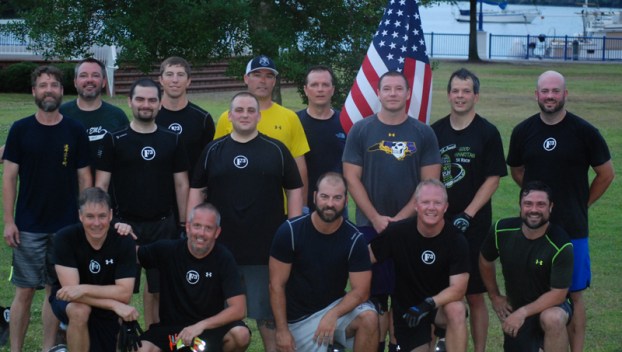 WORKOUT WARRIORS: Members of F3 get together for a group photo after an early-morning workout. The boot camp workout consisted of running, body-weight exercises like squats and pushups, and group exercises that require teamwork. (Sean Finnerty | Daily News)

If you’re ever awake around five or six in the morning and make your way to Festival Park, you’re sure to come across a group of men pushing themselves to their limits. Whether it’s bear crawls, flipping tires, squats, wind sprints, or anything else they can think of, the members of the group, known as F3, meet up six days of the week to go through boot camp workouts.

F3, which stands for fitness, fellowship and faith, is a free, participant-led exercise group that was founded in Charlotte in 2011 by David Redding, who served in the United States Army in Special Forces, and Tim Whitmire.

Part of what sets F3 apart is its unique lexicon, which can be found on the group’s website, f3nation.com. A “Q” is whoever is leading the workout that particular day. The “Q” is in charge of setting the workout and it rotates amongst the members every day. Along with having its own lingo, F3 also gives a nickname to every member, based off of their background, after their first workout.

It was brought to Washington last August, when Jay Surles from the F3 group in Greenville wanted to branch out. Surles reached out to Brandon Eatman of Washington, and the first F3 workout in Washington was held last August.

The local group has grown since then, with 40 guys having shown up at one point or another. Members estimate that 10 to 12 people, on average, attend each workout, but there have been mornings where as many as 25 show up.

While fitness is the main reason for being part of the group, it has become more than that for its members. Kevin Mitchell, also know as Largemouth, said, “it’s grown from an exercise group” to become like an extended family. Brooks Elks said being a part of F3 has brought more accountability into his life and made him a better person in society.

“You hold yourself to a higher standard (after being in F3), you expect it out of others, you bring it out of others through your actions,” Elks, who goes by Bambi, said.

Rob Baxter, who was dubbed Conch Fritter when he joined F3, agrees with Elks about how having the dedication to get up early to go the workouts and improving one’s fitness can improve one’s self overall.

“Whether it’s you as an individual, you within your family or within the community, through fitness and fellowship you raise men up to be leaders,” Baxter said. “That’s really kind of the thing, if you’re physically active, if you feel good, you’re doing all these types of things, you’re going to be a better man, and that should reflect on your daily life.”

One thing the members of the group would like to make clear is the meaning of the third “F”, faith. The group is non-denominational and doesn’t want the word faith to put off anybody who might misconstrue what is meant by the use of that word.

“A lot of people confuse that as meaning religion,” Mac Jones, known as Novocain amongst his fellow F3 members, said. “For some people it is, but that’s not what the core value is. It’s really more of a faith amongst your brotherhood. If I need something Largemouth’s going to be there. It can take a lot of different manifestations.”

For anyone who’d like to join in the workouts at 5:15 a.m. by Festival Park, the guys of F3 say, “just show up.” But just know that the group works out regardless of the conditions outside. One of F3’s mottos is, “there is no bad weather, just bad clothes.”