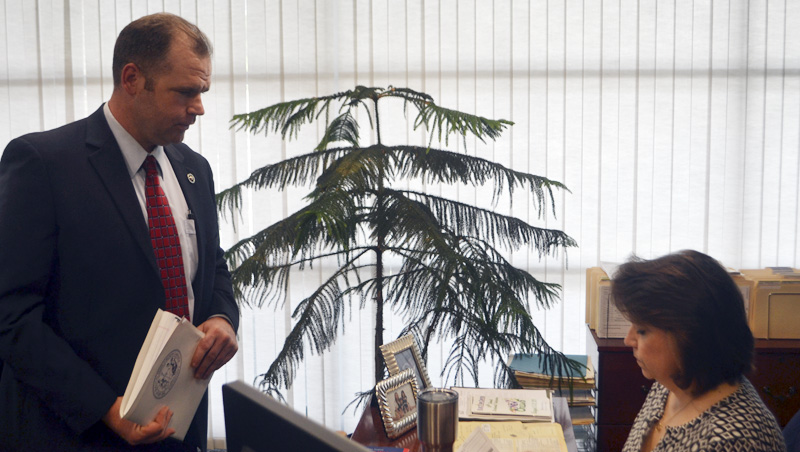 There’s a new candidate for Beaufort County sheriff in town.

On Thursday, Tony Keech Jr. filed the needed documents to be placed on the ballot for the Nov. 6 general election. He filed as Constitution Party of North Carolina candidate, the first such candidate from Beaufort County. The party held its nominating convention in Charlotte on Saturday. It nominated 10 candidates for various positions across the state.

Keech said the party’s seven core values reflect his beliefs. “I live my life with Christian values. They (core values) go along with the Ten Commandments and my Christian values,” Keech said Thursday at the Beaufort County Board of Elections, where he was obtaining information regarding his campaign-spending account and providing the board copies of the documents he filed in at the N.C. State Board of Elections & Ethics Enforcement.

“Currently, I think I’m the only one,” Keech said Thursday afternoon about being the first Beaufort County resident to seek office as a Constitution Party candidate.

The N.C. State Board of Elections & Ethics Enforcement certified the party at the board’s June 6 meeting.

In 2010 and 2012, Keech, then registered as a Republican, unsuccessfully ran for a seat on the Beaufort County Board of Commissioners. He’s never run before as candidate for Beaufort County Sheriff. Currently, Keech works as an investigator with the Washington County Sheriff’s Office. Keech began his career in law enforcement with the Beaufort County Sheriff’s Office, and then went to work with the state’s probation/parole system. While at the sheriff’s office, he began working with the U.S. Marshals Service as a security officer with the Eastern District Office of North Carolina. He’s still working for the service on a part-time basis. He also worked with the Williamston Police Department as a reserve officer while he was with probation/parole. He remains a reserve officer with the Williamston Police Department.

North Carolina officially recognizes these political parties: Democratic, Republican, Libertarian, Green and Constitution. The Green Party was recognized earlier this year. It’s expected to conduct a convention this summer to nominate candidates for the fall elections.

Looping’ master brings unique brand of music back to…