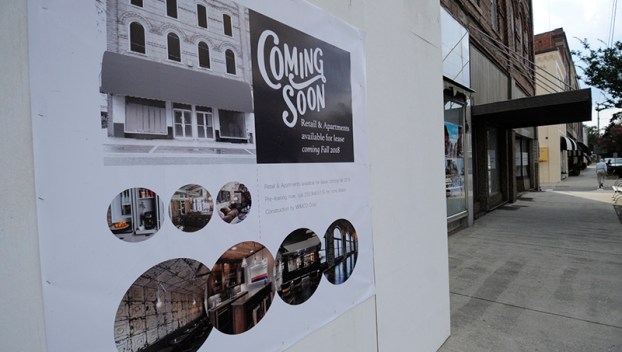 ON ITS WAY: A groundswell of construction is happening in downtown Washington as buildings are being scooped up and reimagined and remodeled for urban living. This building, which housed Washington Jewelers for more than 50 years, will have a wellness and acupuncture center downstairs and luxury apartments upstairs. To see the work firsthand, view the 3D tour at my.matterport.com. (Vail Stewart Rumley/Daily News)

And it’s how local realtor and downtown dweller Scott Campbell is tagging pictures of construction happening in downtown Washington. He’s dropping one photo a day on social media sites, each telling the story of another restoration, rehabilitation, renovation or remodel in progress in the town’s historic districts.

There are currently 36 of them, an unprecedented regeneration of buildings and spaces, according to Emily Rebert, the City of Washington’s community development planner.

“I think it’s incredibly exciting to see what everyone’s doing and to have so many people participating in this,” Rebert said. “It’s not just, you know, the downtown, either. It’s also the residential district. Property owners are investing a lot of money in the district.”

At 183 W. Main St., WIMCO president and 183 West Main LLC principal investor Kevin Rawls is gutting the building that housed Washington Jewelers for more than five decades. Downstairs will be commercial space leased to Copper Canyon Wellness, a massage and acupuncture business; apartments are being built upstairs. Right next door is the future home of Castle Island Micro-Brewery and Restaurant, which will also feature eight luxury apartments once the project gets rolling. Across the street, the Bank of Washington building is undergoing its own restoration by Nick Sanders, who plans to open The Hackney, a micro-distillery and boutique hotel. The next block up, Felicia Huggins, owner of Salon 208, and husband Wayne, a builder, are putting the finishing touches on construction of the second of two apartments available through Airbnb, a job that included gutting the second floor while saving what historic details they could. And further down West Main Street, another commercial/residential project is in the works: Marita and Stuart Egli are transforming the old Tassels building into commercial space on the first floor with apartments upstairs. 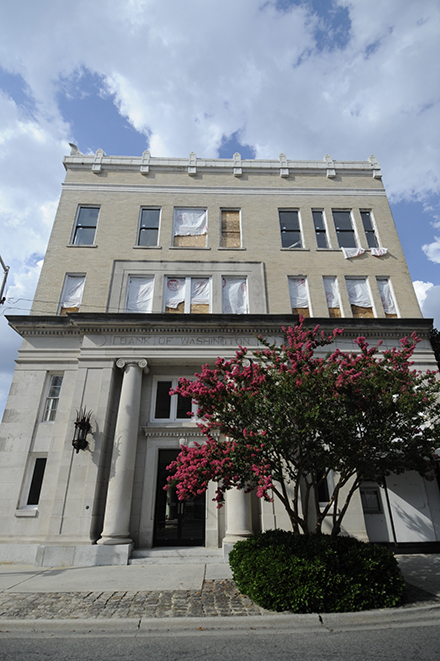 THE HACKNEY: The Bank of Washington will become The Hackney, a micro-distillery and boutique hotel. A combination of grants, historic tax credits and majority personal investment are contributing to its restoration.

Though downtown has seen waves of interest in converting its buildings into living space or hotels through the years, more investors are riding the current wave, according to Campbell.

“It feels like it’s going to stick this time. And I think, primarily, the reason is that it’s individuals, entrepreneurial types, who are investing their own time, and their own money,” Campbell said.

He attributes the current wave to synergy: in the past, out-of-towners interested in buying a home in Washington appeared unimpressed with how little rehabilitation was going on, he said. Not so anymore.

“Now, all they see is total vibrancy and complete action everywhere they look,” Campbell said. “People from outside the area, Raleigh, Greenville, wherever, are really starting to find us and appreciate us. … I would say in the next two to five years, the whole town will be sold out.”

Rebert has seen the increase in the number of requests for construction being submitted for consideration by the Historic Preservation Commission.

“Last month’s commission meeting, nine major works (were presented) and all of them had multiple components to each one. That was the largest agenda that I’ve ever put together,” Rebert said. “Preservation, rehabilitation, restoration and reconstruction — those are the four parts of historic preservation. With everything that’s going on, all those approaches are being used in our historic district right now.”

For Campbell, who lives in the condominium he and husband Bill built above the Washington Daily News 10 years ago, the groundswell in downtown development is the sign of a vibrant downtown-living community on the rise.

For Rebert, it’s a sign that people care about preserving Washington’s history, which she appreciates.

“They’re taking on something bigger than themselves, and they are preserving Washington’s history and contributing to the economic development,” Rebert said. “There’s so much going on. It really is great. It’s wonderful to be a part of it and see this growth happening.” 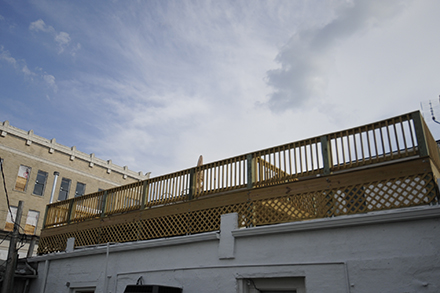 AIRBNB-ING: Finishing touches such as this large deck have been added to Apartments on Main, two apartments built by Felicia and Wayne Huggins and available through Airbnb. The couple gut renovated the second floor of the building while trying to preserve any historic details that were salvageable.

It starts with a single sample of music, a recorded span of melody, of harmony, of voice and rhythm. The... read more