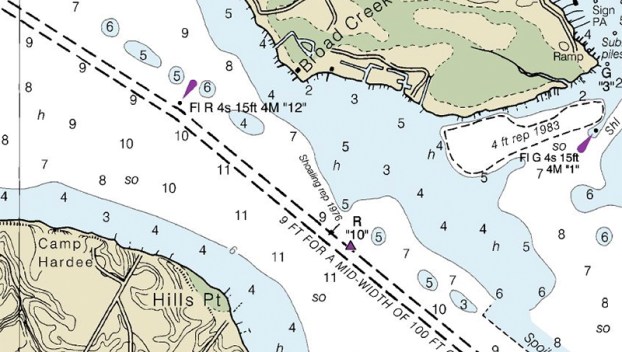 READING A CHART: Using a chart can be especially helpful in understanding one’s position in the river at night. For example, the purple arrow on the left-hand side of this chart marks the position of a flashing red marker, No. 12. The purple triangle further along the channel is an unlit red marker, No. 10. (NOAA)

Washington’s Planning Board, during its meeting Tuesday, will consider a request to change the zoning classification of 6.49 acres just south of Washington High School from R9S (residential) to office and institutional.

After a staff presentation, public hearing on and discussion of the request, the board is expected to make a recommendation to the City Council. The council would decide whether to change the zoning classification or not change it.

At its May meeting, the board unanimously approved a preliminary site plan for a soccer complex on the 6.49 acres. At that meeting, the city’s planning staff recommended two land parcels be combined into one parcel, the proposed site’s zoning classification be changed from residential to occupational and industrial and the land be annexed by the city. Currently, the site is in the city’s extra-territorial jurisdiction, an area where the city’s zoning regulations and building codes apply.

Nell Moseley, who owns a house adjacent to the proposed site but does not live in it because she is renovating it, told the board at its May meeting that she has concerns about the proposed complex. Those concerns include noise, sight and light pollution disturbing the adjacent residential area. The removal of trees from the site would make it easier for noise and light generated at the complex to make its way to the residential area. Removing the trees also would provide a clearer line of sight from the residential area to the WHS complex, Moseley said.

Moseley questioned if a required 20-foot buffer between the proposed site and the residential area is enough. “20 feet sounds great, if you plant me some wax myrtles. … Once you clear that, it will be like looking through someone’s window,” she said.

Board members told Moseley an approved landscaping plan would be required before the project could be approved. That plan would include shrubbery, which would help serve as a buffer, board member Jane Alligood said.

The Planning Board meets at 5:30 p.m. Tuesday in the Council Chambers at City Hall, 102. E. Second St., Washington.

Pamlico River Quilters’ Guild is getting an education in wearable quilts. The guild will host a trunk show Tuesday and... read more