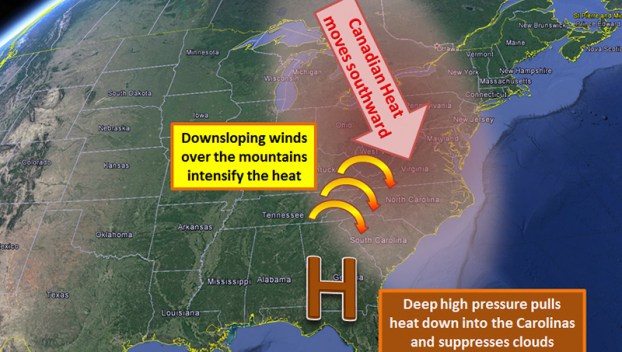 FROM THE NORTH: Most heat waves that affect the Carolinas come from Canada. This illustration explains how that happens. (National Weather Service)

If you believe heat waves that come to the Carolinas have their origins farther south, you would be somewhat correct, but most Carolina heat waves originate as a region of well-above normal temperatures in Ontario, Canada, three or four days before reaching the Carolinas, according to the National Weather Service.

“This Canadian heat is typically the result of high pressure over the Great Lakes and unusual upper level ridging over eastern Canada. If this high pressure region is forced to move south, the heat will follow it down through the eastern United States. The heat wave then begins across the Carolinas as the high moves into Georgia, often merging with the Bermuda High offshore,” according to the National Weather Service website.

In Beaufort County, heat indices are expected to range from 100 to 105 degrees through Friday, according the National Weather Service office in Newport. Today’s high temperature is forecast to be in the low 90s. The high temperatures for Tuesday and Wednesday should be in the mid-80s, before returning to highs in the low 90s for Thursday and Friday, according to NWS forecasts. The chance of showers and thunderstorms today range from 40 percent during daylight hours to 30 percent tonight.

NWS forecasts call for no thunderstorms or showers Tuesday and Wednesday.

The National Weather Service defines a heat wave as a period of abnormally and uncomfortably hot and unusually humid weather, typically lasting longer than two days.

The Carolinas have suffered through vicious heat waves throughout history, particularly during the decades of the 1950s, 1980s and now more recently beginning in 2007. In some cases, the heat was accompanied by severe drought, causing massive agricultural impacts and stress to local water supplies.

In June and July 2012, a widespread heat wave affected most of the United States. It was responsible for at least 82 reported deaths while breaking thousands of high-temperature records from Colorado eastward to the East Coast. July 2012 was the hottest month ever recorded in the history of Wilmington. During that month, five days reached or exceeded 100 degrees, according to NWS data.

When the Carolinas suffer heat waves, the Pacific Coast of the United States and the Canadian Rockies tend to have below-normal temperatures, according to NWS data.