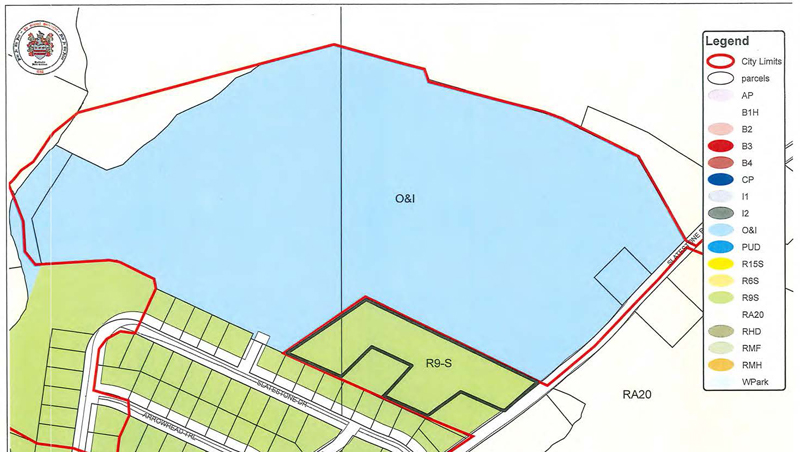 After a public hearing Monday, Washington’s City Council is scheduled to consider approving a preliminary site plan for a soccer complex on land south of Washington High School.

At its June meeting, the Planning Board unanimously approved the plan and recommended the City Council approve it. The city’s planning staff recommends two land parcels be combined into one parcel, the proposed site’s zoning classification be changed from residential to occupational and industrial and the land be annexed by the city. Currently, the site is in the city’s extra-territorial jurisdiction, an area where the city’s zoning regulations and building codes apply.

The regulations governing the zoning district (single-family residential) in which the proposed soccer complex (a permitted use in that district) would be located require special development standards in order to be permitted. “When areas are to be used for athletic events than are located in a residential zone a public hearing shall be conducted before the City Council for the purpose of hearing any comments by the public as to the location,” reads a memorandum from John Rodman, the city’s director of community and cultural services, to the mayor and council members.

Nell Moseley, who owns a house adjacent to the proposed site but does not live in it because she is renovating it, told the board she has concerns about the proposed complex. Those concerns include noise, sight and light pollution disturbing the adjacent residential area. The removal of trees from the site would make it easier for noise and light generated at the complex to make its way to the residential area. Removing the trees also would provide a clearer line of sight from the residential area to the WHS complex, Moseley said.

Moseley questioned if a required 20-foot buffer between the proposed site and the residential area is enough.

A supporter of the project explained the genesis of it.

“Two years ago, our high school soccer team made it all the way to the playoffs for the state championship, and had never played on a regulation-size soccer field until that state championship,” said Roy Parker, who is associated with the project. “His (board Chairman John B. Tate III’s) son was the goalie. It was a heartbreaker. On the way home, I looked at my wife and said, ‘We can’t let this happen again.’”

After that loss in the championship game, the school system began looking for land on which to build a regulation-size soccer field. Parker said an $80,000 donation from a private donor served as seed money for a fundraising effort, which now has $155,000 for the first phase of the project, Parker said.