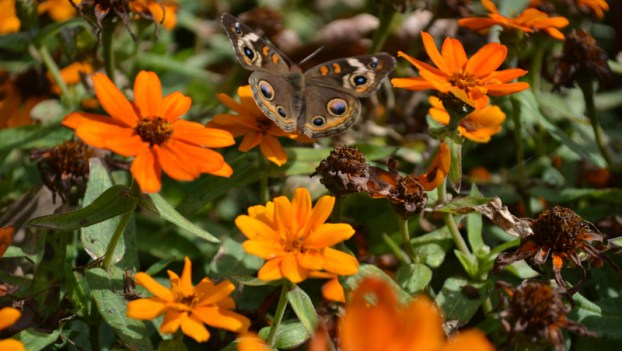 WILD AT HEART: A buckeye butterfly alights on zinnia. Zinnia is one of many wildflowers that are drought and heat tolerant and adds a colorful splash to any landscaping. (Vail Stewart Rumley/Daily News)

How a garden can weather the weather

Long, hot days, where the temperature soars into the 90s; no clouds on the horizon promise to break the heat with a downpour; the sun beats down mercilessly.

Air conditioning means respite from the heat for humans, but there’s no such thing for the plants that make up the landscapes built and lovingly tended by amateur gardeners across Beaufort County. Instead, it takes a combination of watering knowledge, plant choice and siting to keep that lush landscaping in the height of summer, according to farmer and gardener Sandy Ratcliff.

It might seem like it’s a good idea to soak flower beds when it’s hot, but sometimes that’s not the best idea — it all depends on where you are.

“In Washington, where my main activity is, the soil is really sandy and really well-drained. It doesn’t hold water for very long,” Ratcliff said. “If you’re trying to put an inch of water or inch and a half at a time, you’re just going to be wasting it.”

Ratcliff said plants growing in sandy soil are better off being watered moderately a couple of times a week, rather than a soaking all at once.

“In other words, don’t try to flood your soil with water,” Ratcliff said. 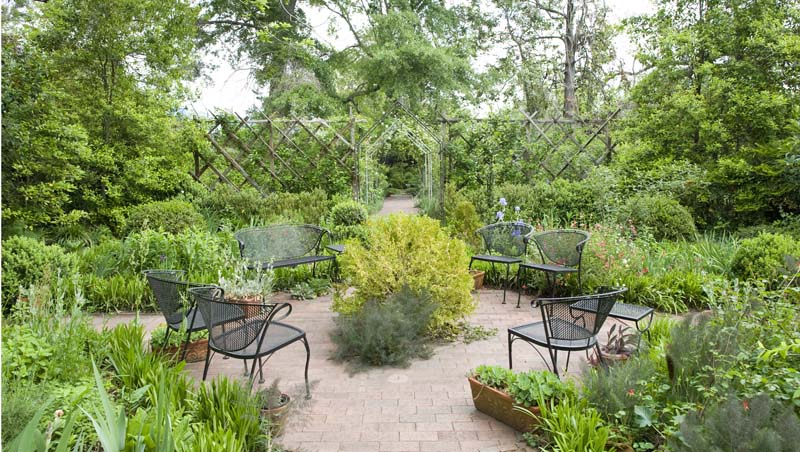 WEST MAIN STREET HIDEAWAY: Sandy Ratcliff’s West Main Street backyard was a lush, green landscape when it was featured in a 2012 issue of Washington The Magazine (Daily News)

The advice doesn’t apply across the Beaufort County board — for example, the soil in Terra Ceia will hold a lot more moisture than the sandy soil of Washington, he said, but gardeners can assist the moisture-holding process no matter their location or soil type by weeding and keeping beds layered with mulch.

“You want to keep it as weed-free as possible. (Weeds are) just going to be eating up nutrients and water,” Ratcliff said. “Keep your beds mulched because that preserves water, as well as keeps your weed population down. It’ll help keep stress off your plants and maintain soil moisture.”

Plants that beat the heat

Some plants are just better suited to dry, hot weather and seem to thrive even when there’s been a run of hot, sunny days.

“You can pick plants that can take hot, dry weather to possibly eliminate some of the frustration of losing plants,” Ratcliff said.

Lantana is one. With more than 150 different species, gardeners have their pick of colors, which cover a vibrant spectrum and include multicolored blooms. Phlox paniculata, commonly known as garden phlox, is another summer-hardy flowering plant, its blooms ranging in color from white to pink, crimson and purple and varying shades between. 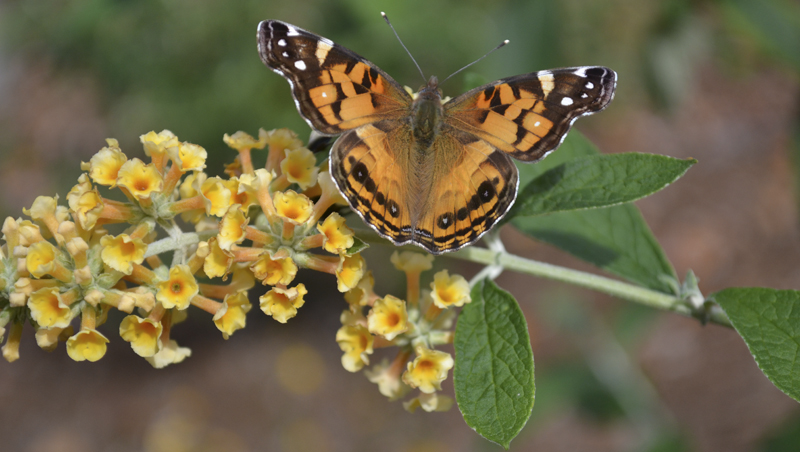 Salvia is another — with its contrasting green leaves and long, deep purple spikes of flowers make a statement in any landscape.

“Everything needs to be watered moderately, but if you slip up and miss a week, these three things will be more forgiving,” Ratcliff said.

Ratcliff added liriope and wildflowers to the list of the heat-tolerant.

“Trying wildflowers has worked out pretty well for me too. You can’t buy wildflowers at Lowe’s but you can buy seeds,” he said. “They take temperatures very well because they have survived on their own forever.”

A plant is wired to survive, but surviving and thriving are two different things. That’s where location comes in. A plant that needs full sun should be planted in a location where it can have it; a plant that loves shade, should stay in the shade. In between, there are many options for partial shade/partial sun. For example, gardenias’ petals will burn and fall off if exposed to too much afternoon sun — ideally, they’re planted in a location that offers morning sun and afternoon shade.

It might not kill a plant to be in the wrong spot, but it location is the difference between simply living and thriving.

“They’ll take a lot of different things — plants can surprise you,” Ratcliff said. “But if they’re in right place, they’ll do even better.”

In an effort to save the former Carter house next to Brown Library from demolition, Washington’s City Council authorized city... read more