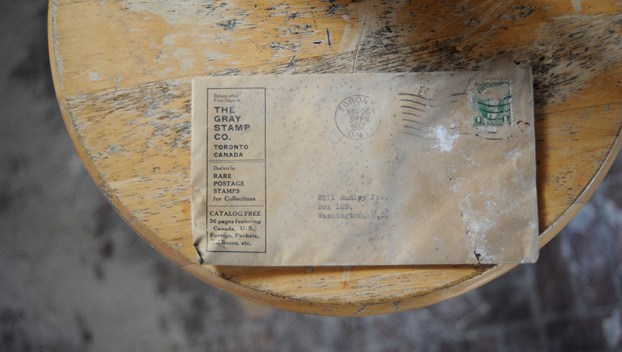 FINDINGS: Found during demolition of the walls and ceilings of the Olsen family’s East Second Street home in Washington, this letter addressed to Bill Rumley Jr. from the Gray Stamp Company was postmarked in 1937. (Vail Stewart Rumley/Daily News)

It’s not so unusual to come across pieces of history when doing major renovations on an old home. A notable example would be the 1980’s Myers House renovation into the law offices of Gaskins and Gaskins on Water Street, in which “witch bottles” were unearthed in the cellar, an unsophisticated method of warding off evil for the superstitious.

At the Olsen house on East Second Street, the kitchen gut renovation is about halfway completed, and it hasn’t been without some interested finds.

A month ago, the family, with the help of contractor Chris Smith and interior designer Stacey Fuldner, embarked on a project that would take the kitchen down to bare walls. The kitchen, tacked onto the rear of the circa-1880s home, had some secrets: a chimney behind a wall; an entire concrete slab porch beneath the floor. As demolition progressed, more secrets have been revealed, and a few plans changed accordingly.

“We’ve updated some of the plans because we found a really pretty exposed-board ceiling and a higher ceiling in the bar area when you first walk in,” said Jane Olsen. “All good things so far.”

Some of the other finds have been a little bit more unusual, such as a letter from a Toronto stamp company addressed to Bill Rumley Jr., postmarked 1937 and found behind a wall — no one knows how long it’s been there. 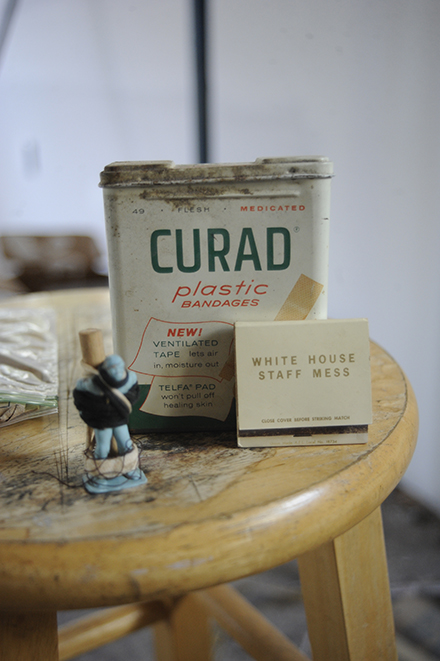 LOST TREASURE: Tucked into the ceiling of the kitchen that was added onto the house in the 1950s was this treasure trove: a metal Curad bandage box containing matches from the White House Staff Mess hall and a G.I. Joe in a hostage situation.

Out of the ceiling came a box of Curad bandages in remarkably good condition. Inside the metal box were a G.I. Joe action figure which appears to be in a hostage situation, along with a book of matches embossed with “White House Staff Mess” on one side and a line drawing of the White House on the other.

“I agree with Jane’s theory that it was some kid’s treasure that he stashed away,” Andy Olsen said.

Most interesting was the weapon that nearly took out Smith on its way down from the ceiling to the floor.

The weapon looks a lot older than it actually is. The Dixie Gun Works pistol is a replica of those used by the military in the 1800s, but likely purchased during the 1950s. 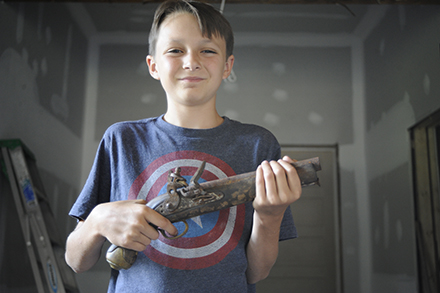 BLAST FROM THE PAST: Emmett Olsen holds one of the finds made during the Olsens’ kitchen renovation: a Dixie Gun Works replica of a cavalry pistol found in the ceiling.

“It is a working gun. You could buy the kit and build your own gun. So, at one point and time, it would have been a working weapon, but it is not anymore. Rust and corrosion and time have taken its toll,” Andy Olsen said.

Andy Olsen said he believes the finds came from the attic, where a crack between the original house and the addition could have resulted in these items sliding into what is now a time capsule from the 1950s.

Now the Olsens are looking forward: in about 45 days, the kitchen renovation should be complete and the family can go back to their normal living arrangements, with laundry facilities and meals cooked on a stove, not on a cookplate, and dishes washed in the new farmhouse sink as opposed to in the bathtub.

“It’s rough, but we’re making do,” Jane Olsen said. “It will be worth it in the end, I’m certain of it, but in the middle, it’s pretty rough.”

Her advice for those considering living through a major kitchen renovation: “Have really good neighbors who will let you use their kitchen and laundry facilities,” she laughed. 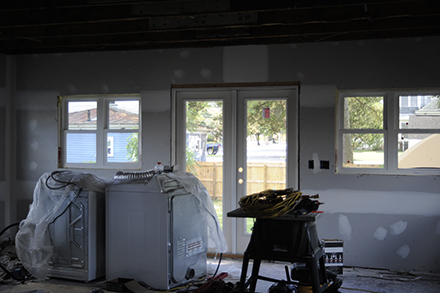 HOME IMPROVEMENT: New siding, new windows and new double doors define the new look of the Olsen family’s kitchen. About halfway through the renovation, the project includes an expansive deck off the back door. 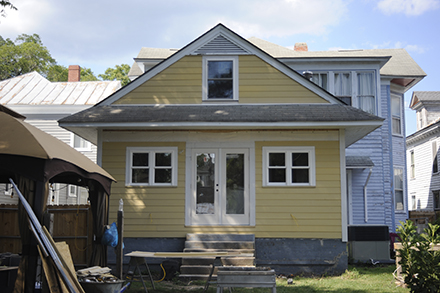 Arts of the Pamlico, downtown businesses to host Sidewalk Sale

For those who enjoy browsing the wares of businesses in downtown Washington, tomorrow is the perfect opportunity to find great... read more