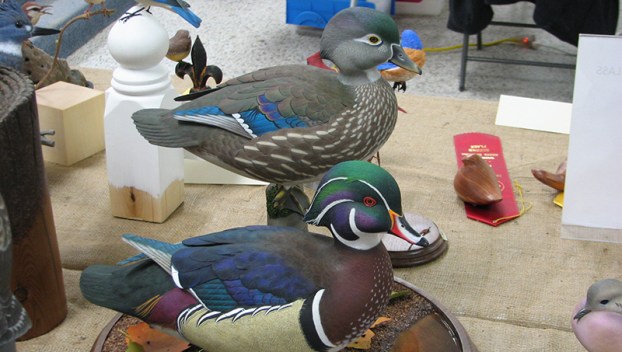 It’s back. The North Carolina Decoy Carving Championships are a part of the 2019 East Carolina Wildlife Arts Festival again. The festival, set for Feb. 7-9, is presented by Arts of the Pamlico, East Carolina Wildfowl Guild and Washington Tourism Development Authority.

“We’re glad to have the decoy-carving championships back this year. Jay Sullivan with the guild is coordinating that,” said Debra Torrence, executive director of the Arts of the Pamlico.

“We’re going to have a ‘glamping’ display — glamorous camping. We are going to raffle off the tent,” said Torrence. “We’ve got a couple food trucks coming and we’re doing workshops, including a duck-calling workshop,”

Ducks Unlimited donated items for sale, demonstrations of wood-burning techniques and an assortment of vendors will be available. “We’re chock-full of vendors,” Torrence said.

The Beaufort County Literacy Volunteers will be selling seafood chowder for the first time.

“The festival’s T-shirts will be back, too,” Torrence added.

The arts council is getting help with the festival.

Tickets for a one-day pass are $7 each or $12 each for a weekend pass. Add $2 for credit card or Paypal purchases online.

As for the North Carolina Decoy Carving Championships, entry fees have been reduced. In case of a lot of entries from one person, there is a maximum-capped entry fee.

There are eight divisions in the competition, including the International Wildfowl Carvers Association’s Tri-County Telephone Canvas Gunning Decoys, the East Carolina Pamlico Gunning Decoys, the working decoys are in memory of Dr. Charles Moore, ECWG contemporary antique display and the IWCA style shorebirds.

Prizes range from $350 to $5, depending on professional, intermediate or novice status.

City to close on new property for police station

The Washington Police Department will have a new home a few blocks down from its old address on Third Street,... read more