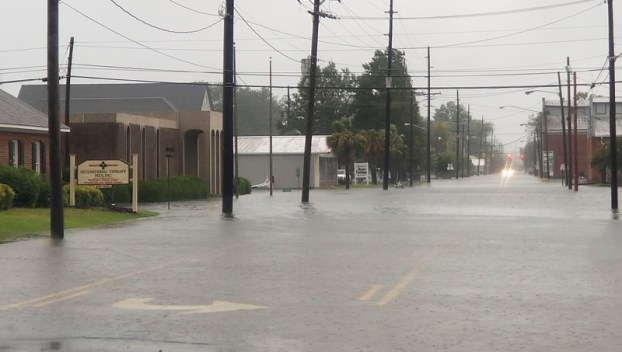 FEMA funding could decide if WPD building is selected for repairs

The city is requesting proposals from qualified firms for the repair of all damages to the Washington Police Department caused by Hurricane Florence and of communications equipment used by the department.

However, the Federal Emergency Management Agency could play a role in what happens to those repairs. Earlier this month, the City Council voted to purchase a 3.7-acre site to build a new station, the former Dr Pepper plant at the intersection of East Third Street and Bridge Street.

Proposals are due Jan. 31 at 10 a.m. The city reserves the right to reject any and all bids. The scheduled start date for the project is Feb. 12 and an end date of May 12. If the project is not completed by May 12, there will be a $100 penalty per day until the project is completed.

The department is located in a flood-prone area. Flooding from Hurricane Florence significantly damaged the department and communications equipment to the point of relocating.

“We got about 46 inches of floodwater in the building that covered the whole entire building. We lost desks, chairs and things like that. The biggest thing is we lost part of our communication system,” said Stacy Drakeford, the city’s director of police and fire services. “That was the biggest piece of that puzzle — the communications equipment.”

Federal Emergency Management Act funds are to be used to fund the contract only, if the repair contract is awarded.

“Depending on what some of the FEMA offerings are, it will be a variable, I guess, that will be under consideration with the relocation. Some of the FEMA funding would come with the contingency that the building would have to be demolished or elevated. It’s not feasible to elevate. We analyzing the options,” said City Manager Jonathan Russell.

“We’re still looking at a couple of different options for the funding and to what extent for rehab, if any,” Russell said.

If the repair contract is awarded, they include a mold/biological contaminant remediation protocol and repair of electrical damage. The scope of work includes all ducts being examined with a camera to determine condition, all ducts to be cleaned and sanitized to rid it of bacteria and other debris and replacement of all air diffusers (supply and return) to be replaced.

For the communications replacement, the scope of work includes replacing the dispatch console. Dispatch console solution must provide for the following:

Washington is making progress on addressing substandard housing in the city. “I think it’s in the city’s best interest to... read more