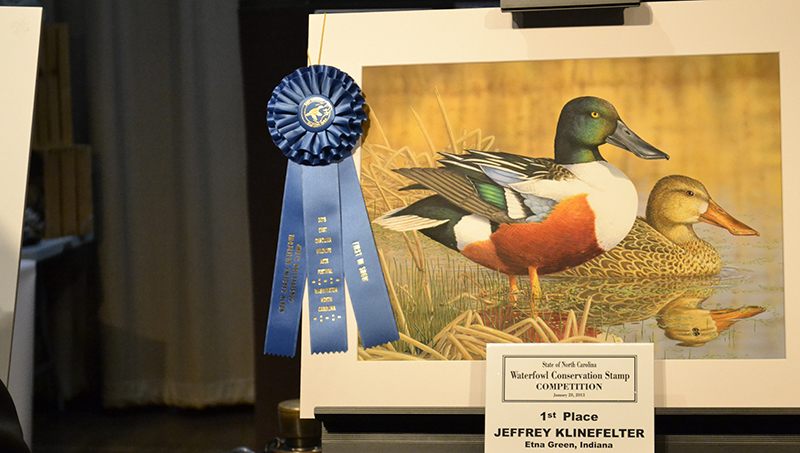 ANOTHER ONE: Jeffrey Klinefelter is the winner of the 2019 Waterfowl Conservation Stamp Print competition. He won the 2013 contest with this painting of a northern shoveler. (Mike Voss/Daily News)

Jeffrey Klinefelter, a resident of Etna Green, Indiana, is the winner of the 2019 Waterfowl Conservation Stamp Print competition held at the Washington Civic Center on Tuesday.

He previously won the contest in 2013 with a painting of a northern shoveler. He’s won multiple contests in other state contests.

“I have entered North Carolina’s contest for several years. It is one of the more prestigious competitions, and it has one of the larger cash awards,” Klinefelt said. “I usually do well, finishing in the top five most years.”

This year’s painting was of ring-neck ducks, Klinefelter said.

Klinefelter said he probably would not attend the unveiling later next week.

There were 23 entries this year, but four were disqualified by a representative of the N.C. Wildlife Resources Commission for various reasons, said Paula Stephenson with the Washington Tourism Development Authority. The commission and the authority sponsor the contest.

Garrett Jacobs of Orlando, Florida, won the 2018 contest with a painting of a canvasback duck.

This year, artists were able to submit a full-color, realistic rendering of tundra swans, blue-winged teal, ring-necked duck, lesser scaup or bufflehead, which had to be depicted in the appropriate habitat. Many of the best waterfowl artists in the world enter the North Carolina contest. The winning artwork will be featured on the 2019-2020 waterfowl conservation stamp, also known as the North Carolina duck stamp.

This year’s blue-ribbon entry will be used as artwork for the prints and stamps sold to help pay for North Carolina’s portion of the North American Waterfowl Management Plan, an international agreement aimed at protecting waterfowl and waterfowl habitat. The sales of prints and stamps also support waterfowl research and purchases equipment used in wetlands management.

The artist who submits the winning entry receives $7,000 in prize money and a $300 travel allowance to help him or her attend the unveiling. The top five entries will be unveiled at a Feb. 7 reception at this year’s East Carolina Wildlife Arts Festival, which is set for Feb. 7-9.

Publication of photographs of the top-five entries is prohibited until after they are unveiled at the reception.