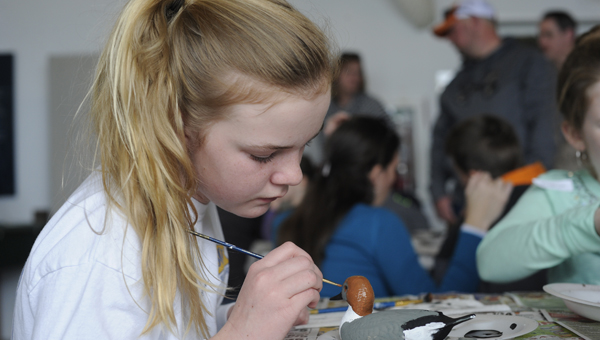 DUCK DESIGN: The children’s decoy-painting workshop at the North Carolina Estuarium, held in conjunction with the East Carolina Wildlife Arts Festival and North Carolina Decoy Carving Championships, has drawn a packed house in past years. Children get to paint the decoy and it’s theirs to take home.

There are other activities, some geared toward children, that might be somewhat off the radar. They might not be known to many festival-goers.

The festival starts Feb. 7 with a sponsors’ reception at 5:30 p.m. and concludes the evening of Feb. 9. The festival is organized and/or supported by Arts of the Pamlico, East Carolina Wildfowl Guild and the City of Washington.

Children and adults may register for two soap decoy-carving sessions Feb. 9, one at 2 p.m. and the other at 3 p.m. There are 60 spots available, so pre-registration is required. The sessions, held at the Turnage Theatre, are free.

For children ages for through 12, the traditional decoy painting classes — 9:30 a.m., 11 a.m. and 12:30 p.m. — will be held. There are 20 spots available in each class. This event is held at the North Carolina Estuarium. The classes are free.

Russ Chesson, the Estuarium’s operations and programming specialist, weighed in on the importance of children taking part decoy painting.

“I think it is important to teach the children about the hunting culture. … I also thinks it’s a way to teach them to grow as naturalists and that they learn to look at the birds,” he said.

He tries to teach the children the proper way to paint the decoys.

“I create model of the bird that they can follow along with. There are pictures they can look at. Ultimately, and the end of the day, it is their creation. We do try to steer them to looking life real life.”

Retrieving dog demonstrations will be held at 10:30 a.m. and 1:30 p.m. Feb. 9 in the grassy area at Festival Park. Dog owners will show how their dogs retrieve ducks, geese and other wildlife shot by hunters.

There are several educational seminars and workshops. At 11 a.m. Feb. 9, Machapunga Eco Tours will provide eco tour information and a workshop. Gary Ansell, with Killum Calls, will present a duck- and goose-calling seminar from 12:30 p.m. to 2:30 p.m. Feb. 9. Friends of Goose Creek State Park will offer a hands-on seminar on environmental education Feb. 9. On Feb. 8 and Feb. 9, the N.C. Wildlife Resources Commission will have a display available. For locations of each event, consult the festival program.

The festival includes the 5 Stand Sporting Clay event at Hunter’s Point Sporting Clays, 506 Decoy Drive, which is off U.S. Highway 17 north of Washington. The fees are $12 for each youth 16 or under and $19.95 for each adult. Guns and protective gear can be provided. No experience is necessary.

Several downtown shops are offering up to 20-percent discounts for festival ticket-holders. Some downtown eateries will be offering discounts or other incentives. At the Civic Center, Arts of the Pamlico will offer concessions. Food trucks will be available. At Washington’s Presbyterian Church, seafood chowed will be sold by Literacy Volunteers of Beaufort County.