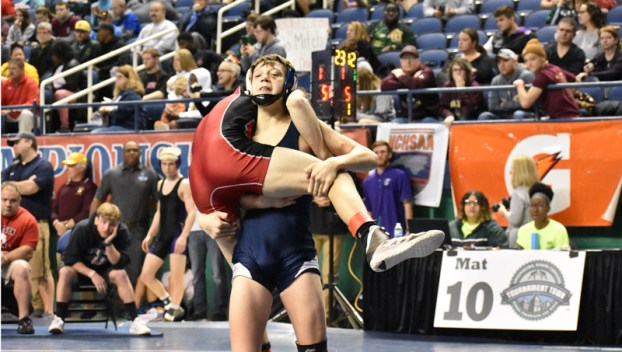 NEED A LIFT?: Brodie Moore picks up Currituck County’s Samuel Hodge before taking him down to the mat in their consolation third-round match at the individual state championships last Saturday. Moore won the match before going on to finish fifth in the state in the 113-pound division. (Melissa Moore)

GREENSBORO — Brodie Moore led the way for Washington wrestling and its program-record nine competitors at the individual state championships in Greensboro last weekend. The 113-pound Pam Pack wrestler earned fifth place, and a spot on the podium, after defeating Trinity’s Aaron Ortega-Perez on points, 3-2, in the fifth-place match last Saturday.

“He (Moore) definitely came ready to wrestle and did about as well as I thought he could do. He got on the podium, which is huge, and I think that’s going to do a lot for him in this offseason and then moving forward into next year as a senior,” Washington head coach Chris Penhollow said.

With Moore the only Washington wrestler to reach the podium, the Pam Pack, as a group, finished in a tie for 27th place. It scored 20 points as a team, which was equaled by Smoky Mountain. Central Academy scored 132 points to win the team title out of a field of 76 teams.

Washington sent the most wrestlers to the individual state championships in the school’s history. But only two of them, seniors Henry Jennings (145) and Logan Nichols (220), had ever competed against the best the state has to offer at the Greensboro Coliseum before.

Penhollow said he knew the first day of competition on Feb. 14 would be tough because five of his wrestlers were taking on No. 1 seeds, plus wrestling in such a large venue with a charged atmosphere and large crowd can leave newcomers awestruck.

“That Thursday, the only two that got wins were Henry (Jennings) and Logan (Nichols), who had been there last year, kind of knew what to expect. Frankly, they were just a little bit more comfortable than the other kids, which that’s to be expected,” Penhollow said. “The kids that it was their first year there, they wrestled like it was their first time their.”

Unfortunately for the two seniors, they surprisingly lost their next two matches to end their runs. After dropping their first matches, Isaac Campbell (106), Dylan Modlin (132) and Walt Gerard (170) all bounced back and had their arms raised in victory after their second matches. But all three fell in their third matches and were eliminated.

Moore was the only Pam Pack wrestler to make it past his third match, bouncing back from a first-round defeat to win three-straight matches in the consolation bracket. The third match, which went into overtime, was particularly special to win, because it came against Samuel Hodge of Currituck County, who defeated Moore in the eastern regional final earlier this season and defeated Moore in last year’s regional to keep him from going to the state championship.

Moore lost in the consolation semifinal to the overall No. 1 seed, South Rowan’s Jacob Cox, but didn’t let the disappointment keep him from winning the fifth-place match.

The four Washington seniors who made the trip to Greensboro, Jennings, Nichols, Gavin Woolard and Dylan Modlin, are surely not satisfied with how their careers ended, but they have accomplished plenty in their time with the Pam Pack, including going undefeated against conference foes through all four years, winning the regional championship for the first time in program history and sending the most wrestlers to the state championships in Washington’s history.

“The last four years that those kids have given us and this program have been phenomenal. They’ve led us to some record-breaking performances as a program the last couple of years, as far as getting into dual-team playoffs, and then advancing in the playoffs, the number of team wins,” Penhollow said. “They stepped up; we went undefeated again in the conference and had another phenomenal year.”

The Pam Pack didn’t do as well as hoped at the state championships, but with state qualifiers Moore, Isaac Campbell, Tristen Nixon, Mykel Warren and Walt Gerard all returning next year, Penhollow is excited for next season.

“It should help motivate them and have them work harder this offseason,” Penhollow said. “I feel real good about where we’re going next year. I actually think we’re going to have a stronger team next year than this year.”

By JUNIOUS SMITH III From the Neuse News LA GRANGE — Washington now has its shot with Kinston. The Pam... read more