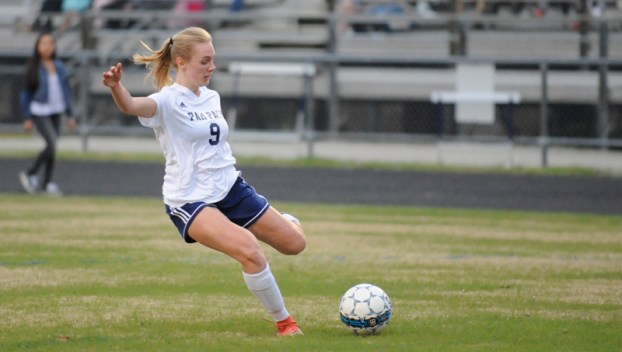 CENTURY MARK: Sophomore goal scorer Lilly Frances Lobos aims for goal in her freshman season. Lobos scored her 100th career and 52nd goal of the season in the first half of the Pam Pack’s 10-0 win over North Lenoir on Monday evening.

LA GRANGE — Washington’s Lilly Frances Lobos scored her 100th career goal in the 30th minute of Monday’s contest, as the Pam Pack score 10 first half goals and stride to victory with a 10-0 win at North Lenoir. Lobos, now owns a school record for goals scored in a career for the Pam Pack, and she’s only a sophomore.

Washington (11-3, 7-0 Eastern Carolina 2A Conference) is now on a seven game win-streak and is outscoring opponents 63-8 within the current span.

“We started pretty quick, we got a score right away and it kind of set the tone for the rest of that first half,” Head coach Ed Rodriguez said about the 10-goal onslaught.

Rodriguez said he likes to keep them motivated by switching up the plays that are designed for scoring goals to different players, letting a multitude of them take free, corner and penalty kicks.

Four different Pam Pack scorers contributed to the 10 goals, as sophomore Arabit Monter scored her first goal of the season and career, also adding an assist to her night.

Alyssa Villegas tossed in a hat trick, matching her career and season-highs, picking up her 16th goal of the season. Rebecca Zerniak also added two goals in the game to up her tally to 15 goals scored in her sophomore year.

This Pam Pack team is still relatively young, and despite a 3-save, shutout performance from goalkeeper Alexa Davenport, Rodriguez says his team still needs to improve defensively.

“Overall, our defensive work,” Rodriguez said about what his team needs to improve on. “We’re not going to keep scoring seven goals a game so take three goals off that and then we’ll see (how we play).”

Moving forward, the Pam Pack will likely host a playoff game, but Rodriguez says the talent in the 2A field will probably force them to travel after the first round.

The Pam Pack will wrap up their season at West Craven on Friday with first touch set for 6 p.m.

BY: MITCHELL THOMAS | THE DAILY NEWS In the blink of an eye, the high school spring sports season has... read more