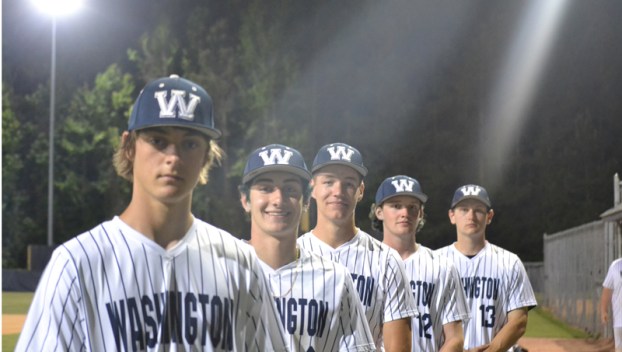 The Washington (15-5, 9-2 East Carolina 2A Conference) seniors showed leadership from start to finish, as Jeremiah Moore got the start on the hill and did a phenomenal job. He struck out nine Vikings in his 5.0 innings of work, only surrendering two hits and one walk without allowing a run.

“I was just hitting my spots and doing what I was supposed to and it all worked out,” Moore said about his performance. “We got to hit better, we’re going to see better pitching and we know it. So tomorrow we’re going to take it seriously in the cage and every day after that, so we’ll be ready.”

The Pam Pack got things started when senior second baseman Wilson Peed roped a double to left-center field. Logan Everette and Hunter Hall singled to load the bases, before Moore chased them all home with a 3-RBI double to center field. On the ensuing at-bat, Pollock homered in his second game in a row to score Moore. Tyler Rowe’s RBI fielder’s choice would score Will Crisp who reached base on a double to right field.

“It felt good (to hit the home run), but I was just glad we could win really,” Pollock said. “We’re really just going to have to hit and play good defense (going forward). If we do that we’ll win.”

Similar to the first inning, Everette led off the second inning with a double. A couple of walks and a fielder’s choice resulted in a two-RBI double from senior Josh Evans. He would later cap the scoring in the ball game off of Mason Weaver’s RBI single.

Every senior on the Washington roster successfully reached base with a hit and scored at least one run in Tuesday’s game.

“It was senior night so we let all of the seniors play, they came in and played good,” Coach Kevin Leggett said. “Right now we’re doing pretty well, I’m happy. As long as they bring the intensity, I think we can win (the conference).”

A conference title is on the line for the Pam Pack Friday night, as they will travel to second-place West Craven(13-9, 8-3 EC 2A), first pitch is set for 7 p.m.