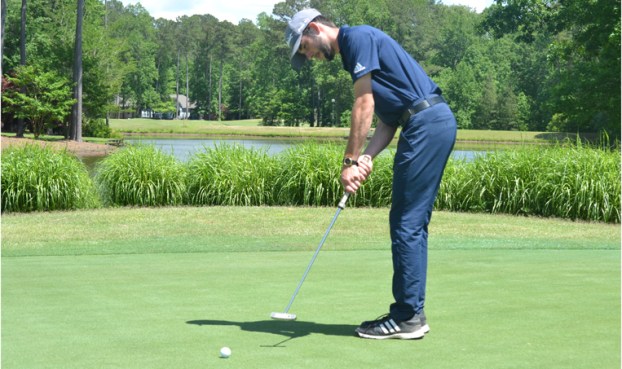 SUNK: Southside’s Luke Matthews sinks a put during his outing at the regional golf tournament at Cypress Landing on Tuesday afternoon. The entire Seahawks team qualified for the State tournament next week. (Mitchell Thomas / Daily News)

CHOCOWINITY — The Southside high school golf team finished in a second-place tie with Princeton to advance to the state tournament at Pinehurst No. 6 on Monday and Tuesday of next week. Northside individual performers come up just short of qualifying for state on Tuesday at Cypress Landing golf course.

Southside’s Luke Matthews was excited about the opportunity to play next week for State at Pinehurst, but needs to practice.

“I got to work on tightening my swing up and hitting the ball straighter for those tight fairways at Pinehurst,” Matthews said.

Northside golf had a couple of individual performers on Tuesday afternoon, and head coach Jared Adams was pleased with their performances despite his golfers coming up a couple strokes short of qualifying for State.

“Overall, not bad. I think some of the tournament pressure is starting to kick-in,” Adams said. “We’re young as a golf team, we just got a lot of little things we can work on, to get better as a team.”

The level of competition gets tougher once you make it through the conference, and Northside’s golfer Luke Jones missed the state cut line by two strokes.

“Had a couple of good shots, had some early bogies,” Jones said. “I kind of lost it on the second hole with an eight, but I recovered with a par. I just need to take a couple more breaths before I swing, keep my head down, be confident, and stay humble.”

Southside had quite the impressive day, keeping all five of their golfers under 95 strokes. Colt Dixon led the team with an 85.

“My mid-irons and my putting were pretty good,” Dixon said. “I struggled getting off the tee some, but I dropped back and played a hybrid so I could keep the ball straight and keep me out of trouble.”

Southside head golf coach Davis Dixon was the eastern region director of the tournament for this year, and was proud of his team’s efforts, which were good enough to advance them to state.

“If you can have four guys that are in the 80’s, you’re going to be competitive,” Dixon said. “We have to make smarter decisions on the course for shot selection, and course management is the biggest key to it.”

Each region holds a meeting the year before regional destinations are decided, and it is between all the coaches in the area to decipher where the regional will be played the following year. Since they voted to have it at Cypress Landing this year, coach Dixon was appointed the director for this year.

PINETOWN — The Panthers seventh inning rally was just shy of pulling off the comeback, falling to Jones Senior, 7-6,... read more