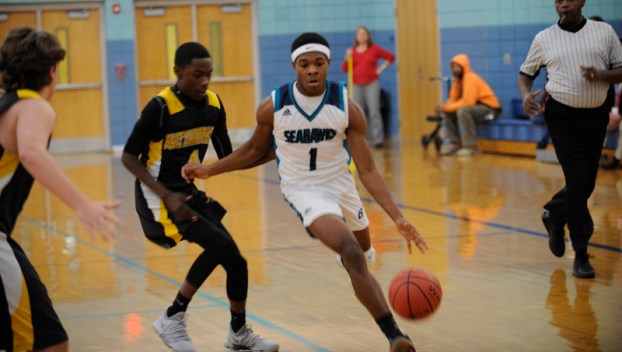 HOME-OPENER VICTORY: Southside’s Jamari Nelson drives past a Laker towards the basket on Thursday in a 47-34 win at home. (Sean Finnerty | Daily News)

CHOCOWINITY — Playing in front of a home crowd for the first time this season, the Southside boys varsity basketball team utilized its full-court press to build a 14-point lead over Mattamuskeet by the end of the first quarter and never allowed its lead to dip below 10 points in a 47-34 win Thursday night, it’s first of the year.

What made the victory even more satisfying was it avenged Southside’s (1-1 1A Coastal Plains Conference) season-opening 56-51 loss to the Lakers (1-2 1A Atlantic 5 Conference) at Mattamuskeet this past Tuesday. The Seahawks came out flat in the first matchup with the Lakers, shooting poorly from the field in the first half (6 of 31) and committing 14 turnovers in the second half. Southside head coach Sean White said he spoke with his team about being more aggressive in the following practice, and his players clearly listened.

“I commend the whole team for just playing all together better,” White said. “They came out fired up and ready to go. You know home court is always a little bit different anyway. You’ve got your home crowd behind you and I think it made a difference tonight. We played more aggressive; we played harder. We probably could’ve stretched the lead a little bit more there in the end, but I was just wanting the win.”

Mattamuskeet broke through Southside’s full-court press in the game on Tuesday leading to easy baskets for the Lakers, but White said the Seahawks tweaked their defense during Wednesday’s practice, which paid dividends on Thursday. Southside shut down Mattamuskeet’s offense and forced turnovers, leading to easy points in transition for the Seahawks, creating a 21-7 lead for the home team by the end of the first quarter.

Leading the charge for Southside on Thursday were guards Jalen Kirkman and Ty Smith, who scored 12 and 10 points, respectively. The duo helped the Seahawks build their insurmountable lead early, as they combined to score 13 of Southside’s 21 points in the opening quarter, including a pair of 3-pointers from Kirkman. Big man Daveion McCraw chipped in with eight points in the game, while also helping control the boards, along with Hunter Tyler.

Mattamuskeet adjusted a bit to Southside’s full-court press in the second quarter as the Seahawks tired a bit putting so much effort into pressuring the Lakers, and Mattamuskeet made a slight dent into the Seahawks lead. White decided to ditch the press halfway through the second and made adjustments at halftime with the score 31-19 in Southside’s favor.

“I made that switch at halftime,” White said. “We went back to that 1-2-2 and it’s almost a half-court press. So, we let them get across and then we trapped them.”

The move paid off, as Southside held Mattamuskeet to just 15 points in the second half. The Seahawks slowed down on the offensive end as well, patiently moving the ball around looking for openings in the Lakers’ zone defense. But Southside was in no rush, as it held a double-digit lead for almost the entire game.

Pam Pack battles hard, can’t quite come up with win