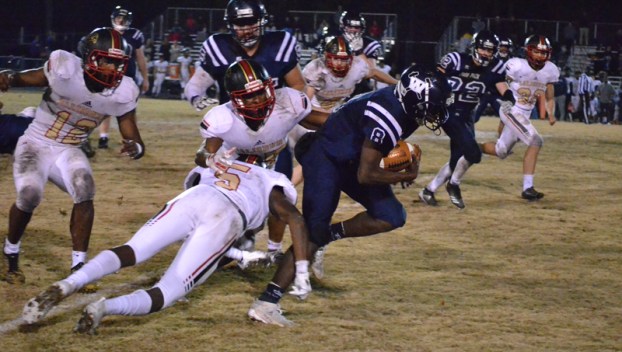 SHAKE IT OFF: Washington quarterback Antwone Godley slips between three defenders and races towards the end zone in the third quarter. (Mitchell Thomas / Daily News)

Turnovers and field position were the story of the night for the Pam Pack, and Salisbury’s defense set the tone. Two, second half Washington touchdowns weren’t enough to overcome a five-possession lead on Friday night at J.G. Choppy Wagner Field.

The Pam Pack defense played relatively well all night. On the first drive, the Hornets turned it over on downs in Pam Pack territory. Washington picked up one first down before they were forced to punt, but they faked it. A wing man was open down the middle of the field, but the ball was fumbled, scooped up by a Hornets defender and taken 45-yards in for the 6-0 lead. 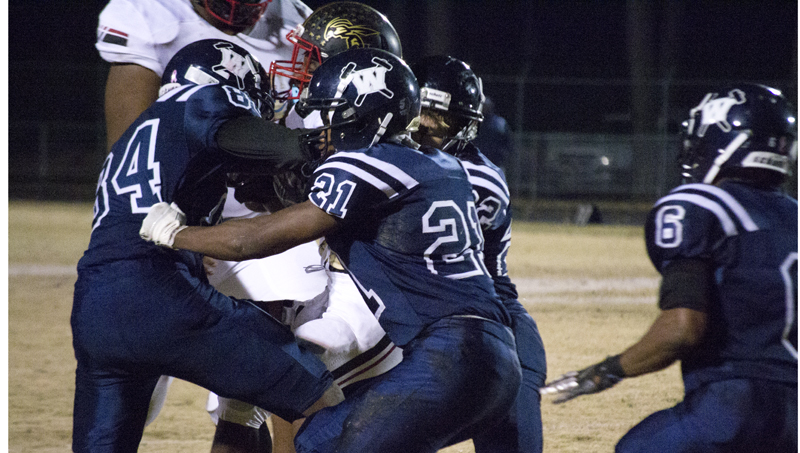 On the next Pam Pack possession, they fumbled again. It was also picked up and taken in from 20-yards out for a touchdown.

The Salisbury running backs picked up chunks of yardage for the rest of the half. A rushing score, a Vance Honeycutt 10-yard passing touchdown, a safety and a field goal pushed the Hornets’ lead to 32-0 at the break.

On Washington’s second drive of the third quarter, Antwone Godley found Walt Gerard on an out route, and Gerard raced down the sidelines for a 70-yard touchdown reception.

An onside kick was recovered for the Pam Pack. Two plays later, Godley turned up field on an option play and trotted 55 yards for a touchdown to cut the deficit to 32-12, but that would cap all scoring.

The Washington offense was dealt tough starting position for a large portion of the night. They started inside their own 10-yard line three times, and once inside the five-yard line. Salisbury began the majority of their drives, and all of their scoring drives, in plus-territory.

The Pam Pack defense held the Hornets offense to modest numbers, but the Salisbury defense is as real as their statistics. After holding opponents to 8.2 points per game in the regular season, they’ve held playoff opponents to seven (Mt. Pleasant) and 12 (Washington) points.

The Pam Pack’s season ends with a 9-4 record and a 5-1 conference mark, the best season Washington has had since 2014. 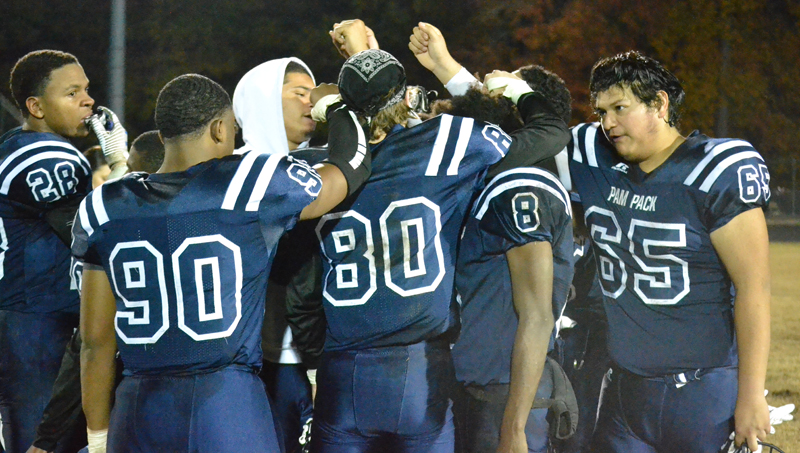 SENIOR CLASS: All of the Pam Pack seniors break it down on “the dub” one last time on Friday night following their second-round exit. (Mitchell Thomas / Daily News)

“I am extremely disappointed in the loss, but at the same time I have a lot of pride in what this group of kids did. This senior class brought a lot to the table, and they rebuilt this program. I hope the next senior class makes it even better, to define what this senior class has done,” Head coach Jon Blank said. “We had a plan three years ago, and it’s nice to see that some of it has worked out. We still have a lot of work to do. The support here is already great, but we need more of it. We’re going to continue to build this thing, and there’s a lot of great things left to accomplish for this program.” 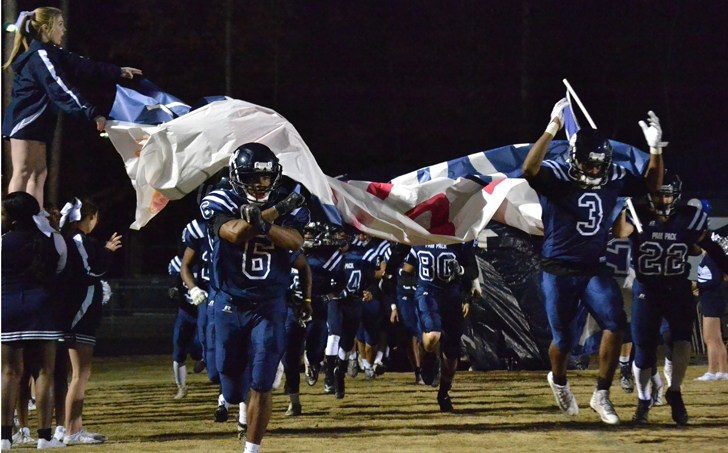 ONTO THE FIELD: Washington football team runs onto the field for the last time in the 2019 campaign. Washington finished their season 9-4. (Mitchell Thomas / Daily News)

The Jaguars outlasted the Panthers in Gaston on Friday evening. Northside led in the first half, 14-8, but two Jaguars scores before the break gave them the lead for good.

The Panthers had a relatively decent night running the football, but the absence of Zakkai Wilson took a hit on the rushing attack.

James Gorham rushed 14 times for 118 yards and two touchdowns. Omari Crandell also found the end zone once on the night for the Panthers.

Carter Boyd, in his final game at quarterback for the Panthers completed 4-of-8 passes for 40 yards on the night, giving him 1,010 yards passing on the season. Carter Boyd became the first quarterback in Northside football history to reach that mark in a season.

“We just weren’t as sharp as we needed to be to win in the second-round of the State Playoffs. This group of seniors have come a long way. Their Freshman year there wasn’t enough of them to have a JV team,” head coach Keith Boyd said.” They stuck together, got in the weight room and we’re able to pick up classmates along the way through talking the game of football up at Northside High School. They have accomplished a lot this year. Not only did they finish the year at 8-5 and gain to extra games via the State Playoffs, but there leadership was paramount. They will be sorely missed by me as their coach. They have given the Northside Football program their hearts and souls. Proud to be a part of what this group has accomplished. All and all I am honored to say I was able to be a part of their football lives. Humbled and honored. Thanks men for your dedication. Go Panthers.”

The Panthers finish their season with an 8-5, and 4-2 in the 1A Coastal Plains Conference. The Panthers’ best season since 2016.