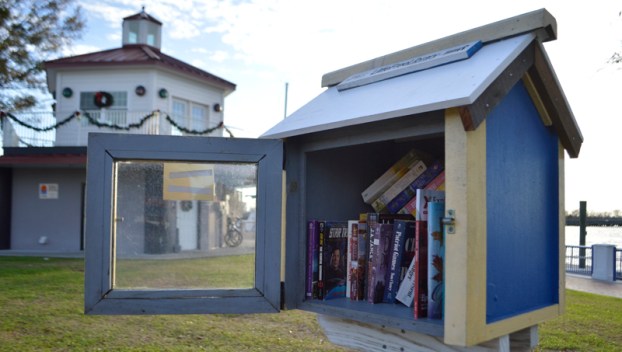 BOOKS FOR ALL: The Beaufort County Literacy Task Force is seeking sponsors to help construct little libraries at locations throughout Beaufort County including parks, municipal ball fields and other high-traffic locations. Washington (Noon) Rotary donated the little library above in 2014, offering free books to all who pass by. (Matt Debnam/Daily News)

Access to reading materials is a key component of literacy, and Beaufort County’s Literacy Task Force is moving forward with a project to put books in easy reach for area residents by erecting little libraries throughout Beaufort County.

The concept is simple. Each little library is a weather-tight box filled with books that are free for the taking to anyone wanting a good read. The boxes essentially function as a lending library — take a book, leave a book, so on and so forth. Currently, at least three little libraries exist in Beaufort County, two in Washington and one in Bath.

“Our idea is to actually canvass Beaufort County with several little libraries,” said Kris Bowen, literacy coordinator at Beaufort-Hyde Partnership for Children and a member of the literacy task force.

At a cost of $250 each, the task force has a goal to establish approximately 25 of the boxes at locations throughout the county in coming years. Businesses or individuals interested in sponsoring a box will be recognized on each box.

Spots identified for the libraries include high-traffic areas such as parks, municipal ball fields, housing authorities, summer feeding sites, schools and downtown green space areas. Bowen says the libraries will also point the way to the nearest brick and mortar library, encouraging their use.

“Studies show that children perform better in school when they are exposed to books at a very young age,” Bowen said. “… What we’re hoping is that we can put these little libraries in areas where folks might not always have access to books.”

Within each box, a variety of books for children and adults will offer options for readers of all ages and skill levels, encouraging literacy for all. The Beaufort-Hyde Partnership has many books ready to go in the boxes for children, as well as a large quantity of books donated from a former bookstore in downtown Washington.

“The task force already has book boxes in waiting rooms in over 30 locations throughout Beaufort County, so the little libraries are an extension of that program by creating a space outdoors where books can be selected and taken home to enjoy,” added Terry Rollins, chairperson of the Literacy Task Force and director of children’s programs at Brown Library.

Bowen says the carpentry class at Southside High School has already expressed interest in helping build the libraries. All that’s left is for the community to help out with sponsorships.

“We love this idea of collaborating with students so that they get the hands-on experience of designing, building and then placing the structures at designated sites and really take ownership of the project,” Bowen said.

The Beaufort County Literacy Task Force is a component of Beaufort County 360, a nonprofit organization led by community stakeholders working collectively on community issues such as literacy and public health. To learn more about sponsoring a Little Free Library, call Bowen at 252-975-4647, ext. 7.

Aurora man tries to swallow cocaine, is charged with trafficking