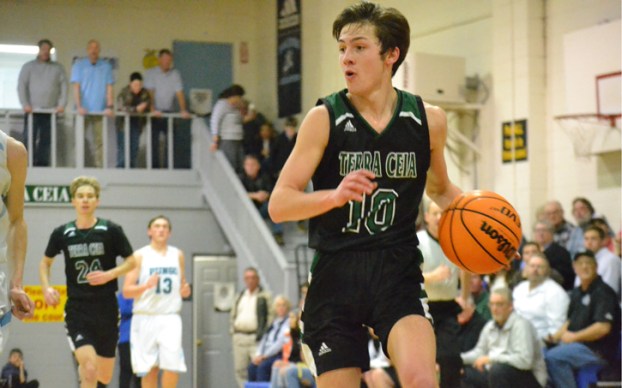 SETTING THE PACE: Terra Ceia’s junior guard Gunner Couch pushes the ball down the court after a steal in the Knights’ 20-point victory to extend their winning streak to 20 games on Friday night in Belhaven. Couch put up 20 points in the victory. (Mitchell Thomas / Daily News)

The Terra Ceia Knights boys’ basketball team has been on a tear over the past month. After defeating Pungo Christian 59-39 on Friday night, the Knights won their 20th consecutive game and clinched the No. 1 seed for the NCISAA Tarheel Independent Tournament.

An electric first quarter from Matt Van Staalduinen gave the Knights the jolt they needed to open up a lead. Alex Van Staalduinen’s domination on the glass and Terra Ceia’s defense took over from there.

A 17-5 lead after the first quarter set the tone for Terra Ceia. Pungo closed the gap with a short 4-0 run, but the Knights slammed the door on it with an 8-0 run before the halftime buzzer, extending their lead to 30-13.

After another stout defensive third quarter, the Knights kept their foot on the gas in the fourth quarter. They scored 20 points in the final frame and erased any thoughts of a late comeback, despite Brent Benson draining three 3-pointers.

Without Pungo’s leading scorer Miller Lee, offensive production was tough to come by for the Raiders.

“Miller being hurt showed up big time,” Pungo head coach Mart Benson said. “I thought he might be able to go tonight, and he just couldn’t. Terra Ceia’s a great team. They’re well coached. We wanted it to come down to this and it just didn’t go our way tonight. It’s just sad this will be the last time I coach on this floor.”

Mart Benson will be retiring from coaching the Raiders after the conclusion of this season. His son Brent Benson is a senior on the Raiders’ squad. He scored 10 points in his final game in Belhaven.

Ryan Bishop and Nate Van Staalduinen also had 10 points each on Friday evening.

Alex Van Staalduinen’s double-double performance was the difference for the Knights. He grabbed 10 rebounds, nine of those coming on the defensive side of the ball, and scored 12 points.

“Just boxing out and rebounding, and the pick and roll was working good,” Alex Van Staalduinen said about what was clicking on Friday night. “We just have to be more aggressive and continue to box out well (going into the conference tournament).”

Gunner Couch continues to perform at a high-level, reaching the 20-point mark for the 16th time this season. He dropped 20 points with eight assists along with six steals on the evening.

Matt Van Staalduinen led all scorers with 22 points, with 11 of those coming in the first quarter.

“(Our defense) was unbelievable. I mean this is 20 games in a row for this team, with that last loss by 1-point to Pungo. If you play defense, everything else is going to be there,” Terra Ceia head coach Roger Klaassen said. “I got some big minutes from guys off my bench. I’m very fortunate to have been a part of these winning streaks since I’ve been at Terra Ceia.”

The Knights earned a first-round bye in the TIC tournament. They will play the winner of Albemarle-Ridgecroft on Thursday night at 8:30 p.m.

The No. 2 seeded Raiders met with Northeast on Monday night in the first-round of the tournament. The only possibility of a round three between Pungo and Terra Ceia, would be in the TIC Championship game, which will be played on Saturday evening at 5:15 p.m.

All games will be played at Lawrence Academy.

It was a clean sweep, as the Terra Ceia Lady Knights defeated the Lady Bears 53-38, and the boys handled... read more