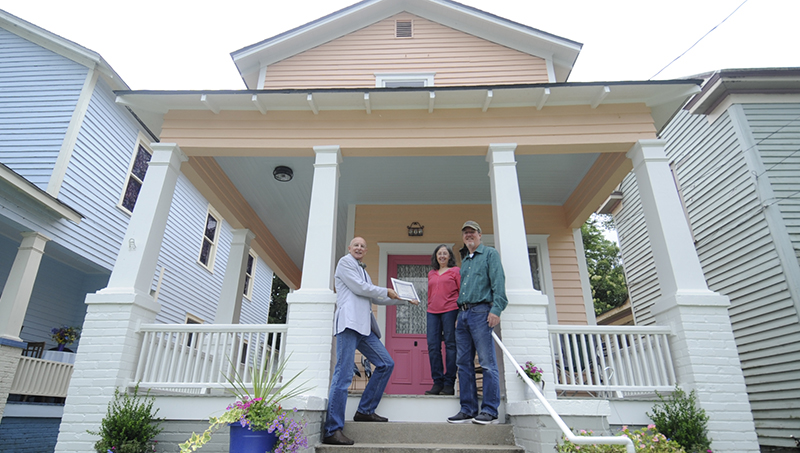 SECOND LIFE: Scott Campbell (left), Realtor and historic preservation supporter, presents Ellen and Pat Flannery with a Terrell Award honorable mention for best residential rehab. The couple purchased the East Main Street home in 2018 and have since restored to the property, even replacing the front door with the original door, which they found hanging in a backyard storage building. (Vail Stewart Rumley/Daily News)

When Pat and Ellen Flannery purchased their East Main Street home in 2018, they saw the peeling paint and ancient appliances. They saw the leaking roof and the damage it’d done to the plaster walls. They saw the decades-old carpet and wallpaper, the sagging porch roof and the mold.

They also saw the possibilities. 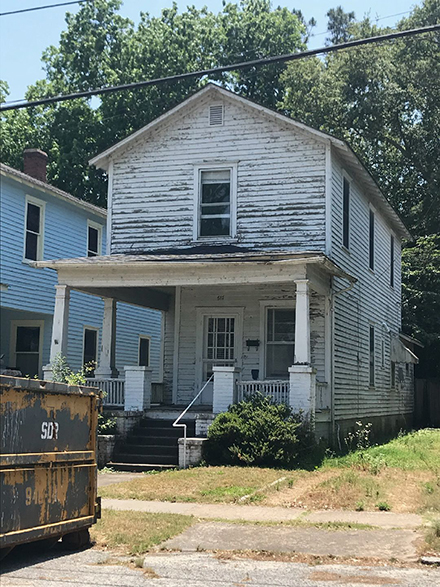 BEFORE: The East Main Street house was in dire shape when the Flannerys purchased in 2018. Since, it has undergone a complete transformation. (Pat Flannery)

“This was a fun story. The Flannerys contact me via email and said, ‘We saw this house online; it’s great; it’s exactly what we’re looking for; it’s a complete wreck,” Century 21 Realtor Scott Campbell laughed. “It was a very specific house for a specific buyer: someone who saw through the wreck and what it could be and that was the Flannerys.”

The flaws and looming total-home makeover didn’t stop the couple, who purchased the house as a second home-away-from-their-home in Phoenix, Arizona, and a place to settle when they visited family. 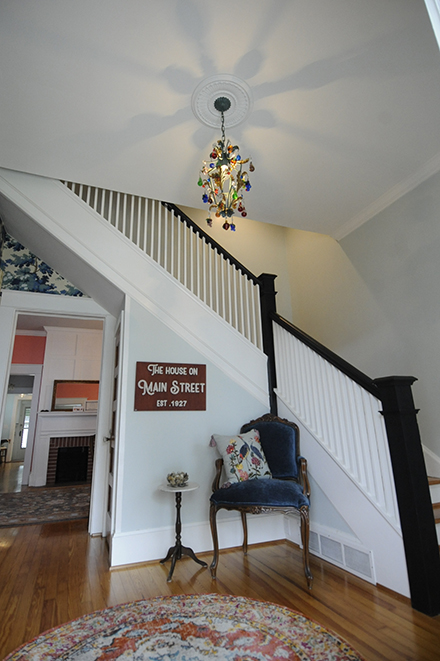 WELCOME: The house on Main Street has a welcoming foyer, framed by the staircase and a colorful, Italian glass chandelier.

“We actually saw the place because we’d come down here and go for a walk,” Pat Flannery said. “We saw the ‘For Sale’ sign and called.”

After a few stop and starts in the purchase, buyers and sellers settled on a price, and that’s when the work began. Matt Sopher, with Turning Point Renovations, signed on as their general contractor. Pat Flannery took on a lot of the demo work himself, scaping and sanding paint, as well as the floors where old carpet padding had adhered to the hardwood beneath it.

What they found beneath the disrepair was a gem.

“Everything was original. The original double-sideboard sink, the original lighting fixtures; the stairway is really pretty,” Ellen Flannery said. 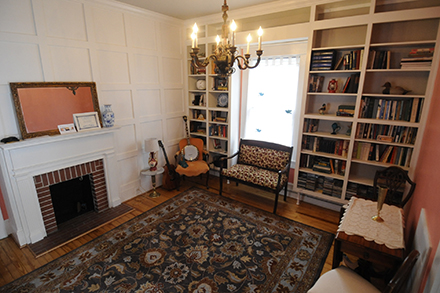 NEW AND OLD: Many of the interior walls were covered with peeling wallpaper. In the living room, the Flannerys added wood paneling to the wall and built-in bookshelves.

At 1,600 square feet, with three bedrooms and two baths — one they added during the renovation — the house had, remarkably, not been changed much at all since it was built. The lack of remodeling over the years turned out to be a positive.

“The painters said, ‘This has never been painted since the original paint job;’ it only had one coat of paint and that’s why the boards were in such good shape,” Ellen Flannery said. “It hadn’t been messed with. It was all original. Nobody had done any bad renovations.”

Less than two years later, the house has a new roof, new plumbing and wiring, a new porch, new details such as wood paneling in the living room and two new columns to shore up the porch roof. 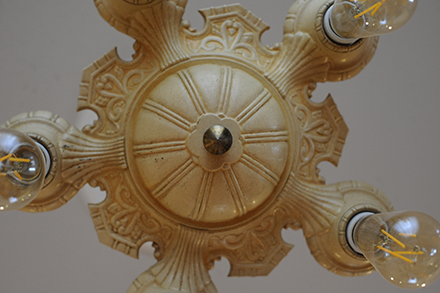 A FIXTURE: Original to the house are several lighting fixtures, including this Art Deco-style pendant lamp in the living room.

The renovation of the Flannery home caught the eye of Campbell, along with City of Washington Historic Preservation Planner Domini Cunningham, as they determined which property owners would receive this year’s Rena K. Terrell awards. The annual awards are given to historic district property owners in four categories: best residential rehab, best commercial rehab, the “Good Neighbor” award and stewardship award. Though the awards had been chosen, the pair decided that the transformation of the Flannery home as the owners followed all historic district guidelines deserved an honorable mention in the best residential rehab category. 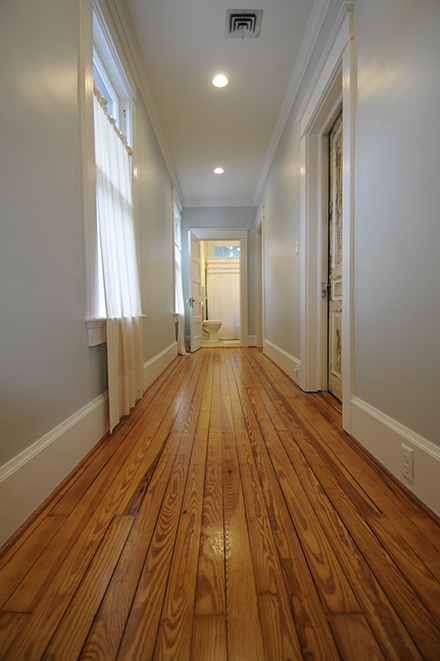 HEART PINE: Covered in carpet for decades, the home’s original heart pine floors had to be refinished but were in remarkable shape.

“They presented all their stuff to the Historic Preservation Commission, as required,” Campbell said. “They are actually going before the commission with a request for a privacy fence in the back at the next meeting. Even though the project, the major stuff, is finished, if you’re in the historic district all of your stuff needs to come before the historic commission.”

The Flannerys remain in Washington for now, as COVID-19 has prevented travel back to Arizona, but they’re enjoying their extended time in town, especially its walkability to shops, restaurants and the waterfront.

“I love being able to walk two blocks down the street right to the river,” Pat Flannery said. “It’s a good neighborhood here. There’s really a neighborhood feeling here.” 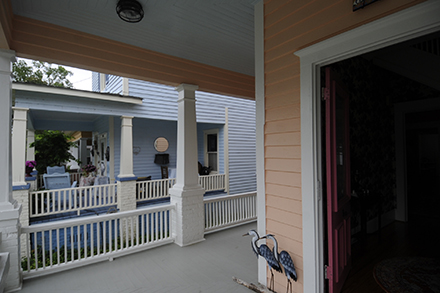 TWINNING: The Flannery home is twin to the home next door, though a mirror image. The two homes were built in 1927 by members of the same family on land that once held a much larger family home. That home burned in a fire, and the twin homes would replace it. 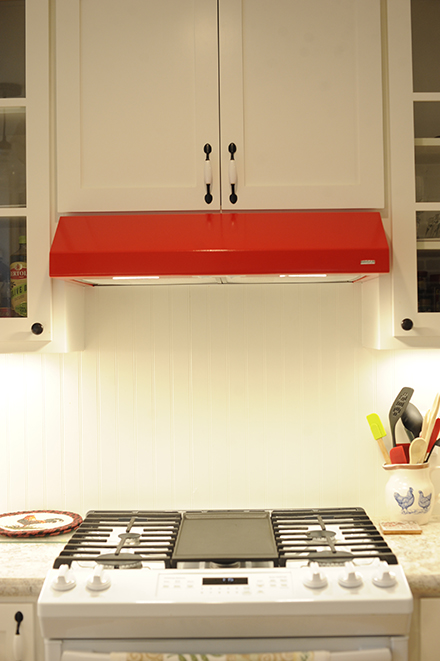 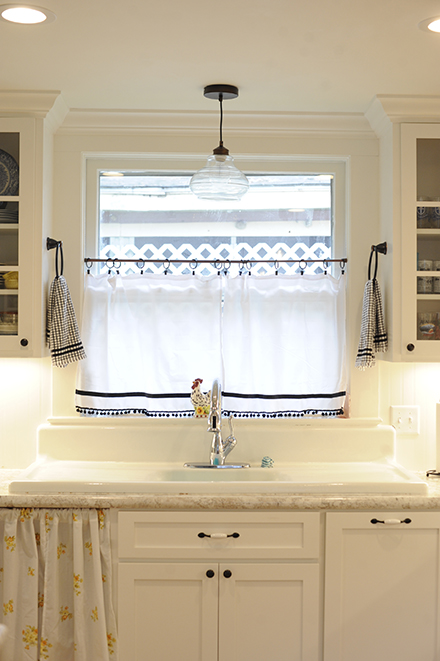 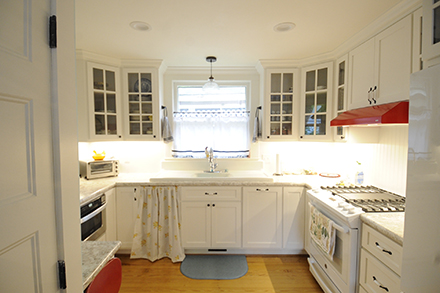 AN ORIGINAL: Though the appliances had to be replaced the double-sideboard sink is original to the house.The Flannerys maintained the vintage look in the kitchen, offsetting white cabinets and neutral countertops with bursts of color in the red range hood and a matching vintage stool.