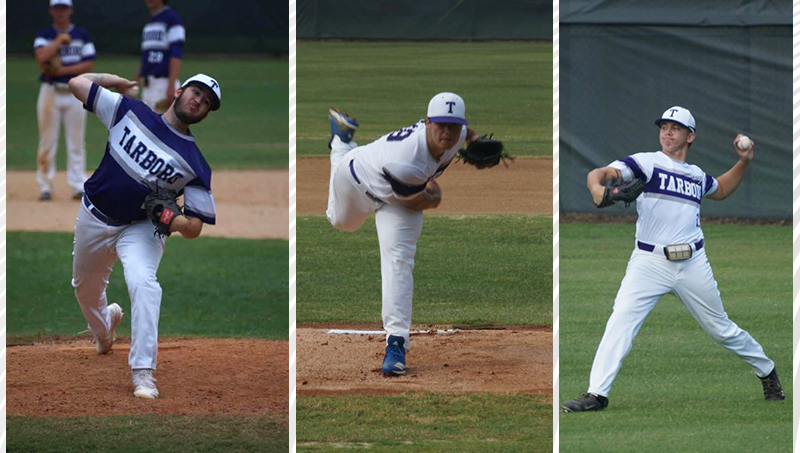 CONTRIBUTED INNINGS IN: Former Northside Panther Zach Woolard (left) warms up before beginning a relief effort. Woolard earned a spot as a bullpen pitcher going into this past season at North Carolina Wesleyan; (middle) former Pam Pack pitcher Tripp Barfield pitches to a batter. Barfield hopes summer ball will help in recovery from an elbow injury; (right) former Southside Seahawk Brantley Cutler fields a ball at right field, working toward a starting role with the University of Maryland-Eastern Shore,

TARBORO — It’s a Sunday afternoon in Tarboro. The Star-Spangled Banner is blaring through the town’s municipal stadium as the River Bandits baseball team is on the field ready to take on the Catawba Stars in the second game of a weekend set.

Looking around, it takes a little extra attention to see a few people wearing masks or notice the extra distance between groups in the bleachers. One could forget for a bit that there’s a pandemic going on.

But there is. COVID-19 is still very much impacting the lives of just about everyone. For the collegiate baseball players who made up the rosters for Sunday’s game, the pandemic canceled the majority of this spring’s season. This Tarboro team gave an opportunity to, among the others who comprise the roster, three Beaufort County products to return to the diamond.

Zach Woolard, Brantley Cutler and Tripp Barfield are all playing for the River Bandits this summer. Woolard and Cutler graduated from Northside and Southside, respectively, in 2018. Barfield graduated from Washington in 2017. The three clashed a number of times during their high school days; Northside and Southside met often in conference play. Barfield’s Pam Pack teams had their classic battles with both the Panthers and Seahawks during annual Easter tournaments in the county, too.

“This is a great experience. With all the leagues being closed with the coronavirus and everything, there’s been guys with big Division I schools,” Woolard said. “We have a guy from Florida State on our team. It’s great to be around guys like that just to see big D-I players and how they work.”

Woolard’s summer routine shows his dedication. He plays his college baseball nearby at North Carolina Wesleyan. The sophomore said he earned a spot as a bullpen pitcher going into this past season. Over the summer, Woolard said he typically wakes up at 6 a.m. to run and work out with teammates before getting out on the field to throw.

“Sophomore year, I had to prove myself, and I earned a spot out of our bullpen. Once I did that, everything started clicking,” Woolard said. “It’s been a great experience so far. I wouldn’t change it for the world.”

The surplus of talent in the Carolina Virginia Summer Collegiate League makes for fine competition, too. Tarboro built a 7-2 lead late in Sunday’s contest with Cutler supplying a run for the offense and Woolard pitching a few innings as a reliever. Catawba made a push in the ninth inning but wasn’t able to complete a comeback.

Unlike Woolard, Cutler hasn’t seen much competitive action since March 2019. He took a red-shirt year this past season. Getting an opportunity to play this summer will help him work toward a starting role with the University of Maryland-Eastern Shore come next season.

“I’m trying to lock down right field,” Cutler said. “I’m just trying to get used to it as much as I can and get comfortable.”

Cutler took the last year or so as an opportunity to work on his body. He said he’s gained roughly 60 pounds in muscle since graduating from high school.

“I tell you what, a whole lot of grilled chicken — that’s the key,” he said, adding that his favorite post-workout meal is a Cook Out tray with a grilled chicken sandwich.

Barfield, who was on the mound for a win on Saturday, hopes this summer can help him finish coming back from an elbow injury. He pitched one season at UNC-Asheville and is now aiming at joining North Carolina State’s roster. The River Bandits have allowed him the chance to get in some innings while he’s also working for an engineering firm in South Carolina.

COVID-19 has derailed plans for many but these three Beaufort County products and their passion for baseball haven’t been deterred.