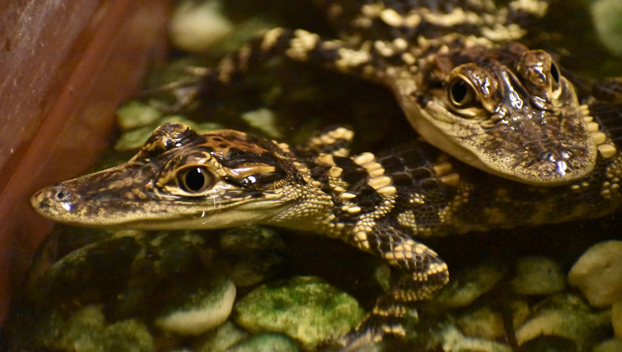 WE NEED NAMES: Since closing in March, the North Carolina Estuarium has lost out on revenue from field trips and donations during what is usually its busiest season. Those who make a contribution to the museum between now and Sept. 4 will have a chance to name these two baby alligators. (Matt Debnam/Daily News)

Fido, Spot, Rover; many can say they’ve named a pet, but far fewer can say they’ve ever named an alligator. A new fundraiser at the North Carolina Estuarium, however, will offer supporters the chance to do just that.

Those who make a donation in support of the local museum between now and Sept. 4 will be entered for the chance to name one of two baby gators that arrived in Washington this past January, not too long before the Estuarium closed its doors due to COVID-19 restrictions.

“A few people got in here to see them, but they really weren’t seen by the public to any extent,” said Estuarium Director Tom Stroud. “We’ve been working with someone for PR and fundraising as we move toward reopening and he had the idea of building a fundraiser around naming the baby gators.” 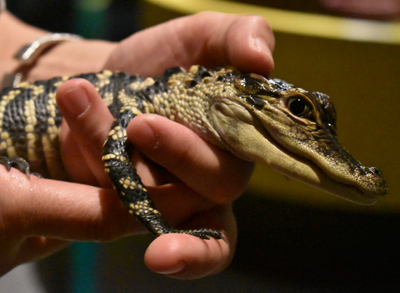 TEMPORARY STAY: Since 2005, the Estuarium has had baby alligators in its exhibit hall. The gators come to the museum from Alligator Adventure, in Myrtle Beach, South Carolina, when they’re only a few weeks old. After about two years, when the gators begin to outgrow their habitat, they are returned to Alligator Adventure and another pair are sent to Washington. (Matt Debnam/Daily News)

As with so many other businesses and nonprofits, the year of COVID-19 has had a profound impact at the Estuarium. With the cancellation of school field trips in the spring, coupled with a state-mandated requirement to close its doors to the public, the local museum has missed out on considerable revenue and donations.

“We’ve been closed since late March,” Stroud said. “It’s been a very significant impact on us, because typically April, May and June represents our busiest quarter in terms of visitation and revenue. That’s the time when we get most of our business from schools, and we completely lost that.”

Though the Estuarium has started back its River Roving Tours and has been able to open its gift shop, it may be some time yet before it can fully open its doors to the public. Under Phase II of the state’s three-phase reopening plan, museums statewide remain closed, alongside bars, gyms, movie theaters and other entertainment venues. Stroud says the Estuarium may be able to reopen its exhibit hall in a greater capacity once Phase III takes effect. 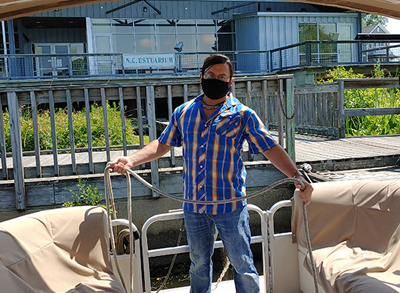 AT THE HELM: Russ Chesson, operations and programming specialist for the North Carolina Estuarium, talks about the changes being made to this year’s River Roving tours. (Karen Thiel)

“We are kind of beta testing visitation by reservation, letting in small groups on a limited basis,” Stroud said. “We’d keep it at a limited number each day and haven’t completely settled on how many. It would let the exhibit hall be used again and get people coming through. I’m sure once we reopen, we’ll still be limited in our capacity and keep the number of people in the building at one time fairly low, just to allow for distancing and reduce the chances of anything spreading here.”

Until that time comes, supporters of the Estuarium can help the museum by patronizing the gift shop or by making financial donations. Contributions can be made online at www.partnershipforthesounds.net/donate or by calling 252-948-0000. To see the latest from the North Carolina Estuarium, find them on Facebook @ncestuarium.

For more information on this year’s River Roving Tours, check out the article below: