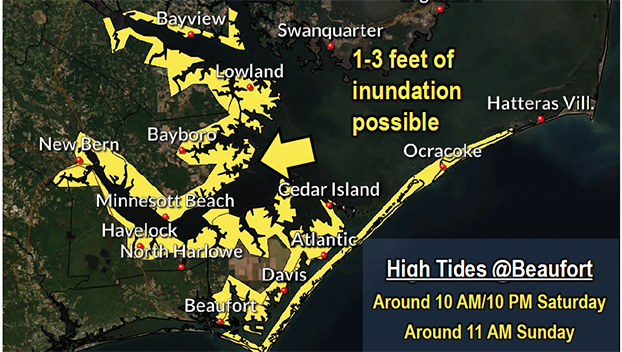 A “long-duration coastal flood event” could mean flooding in some parts of Beaufort County through early next week.

On Friday, a coastal flood advisory was issued by the National Weather Service Newport/Morehead City for low-lying areas near the shoreline of the Pamlico and Pungo rivers and adjacent tidal creeks.

“General windy conditions will continue through the weekend as the remnants of Tropical Storm Sally move away from our area. North winds will increase throughout the afternoon, becoming sustained between 12 and 16 mph, with gusts of 18 to 20 mph,” Beaufort County Emergency Services Chief Deputy Chris Newkirk wrote in an update on Friday afternoon. “These conditions are expected to continue through the daytime hours of Tuesday. … Areas east of Bath and Blounts Creek that are prone to these conditions could experience 1 to 3 feet of inundation between Saturday and Tuesday.”

The flood advisory was also extended to the Pamlico Sound, Trent, Bay and lower Neuse rivers and adjacent tidal creeks.

A combination of forces are adding up to increased risk of flooding: high astronomical tide, a persistent, strong northeast wind and strong, long-period swell from Hurricane Teddy, a major hurricane with 130 mph winds located southeast of Bermuda.

Significant ocean overwash and beach erosion from large, dangerous surf is expected along the Outer Banks, from Beaufort to Duck. The risk of powerful or numerous rip currents is high at all North Carolina beaches — in a Friday afternoon update, NWS Newport/Morehead City warns that “Everyone should stay out of the water.”

Impacts for Beaufort County could result in “elevated threat of property damage or road overwash. Flooding will extend inland from the waterfront threatening some homes and businesses, and a few road closures and flooding of vehicles will be possible,” the NWS update reads. “If travel is required, allow extra time as some roads may be closed. Do not drive around barricades or through water of unknown depth. Take the necessary actions to protect flood-prone property.”

In addition to Hurricane Teddy, the 19th named storm of the 2020 hurricane season, Tropical Storm Wilfred and subtropical storm Alpha are currently active in the Atlantic.