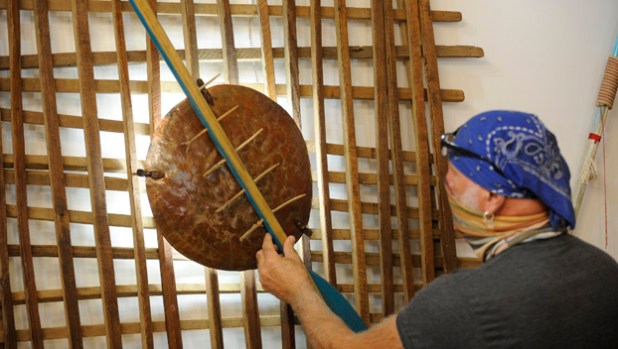 NEW PURPOSE: Jim Adams, pictured working on one of his projects at The Lemonade Art Gallery, repurposes a variety of discarded or unwanted objects and turns them into artwork. (Brandon Tester / Daily News) 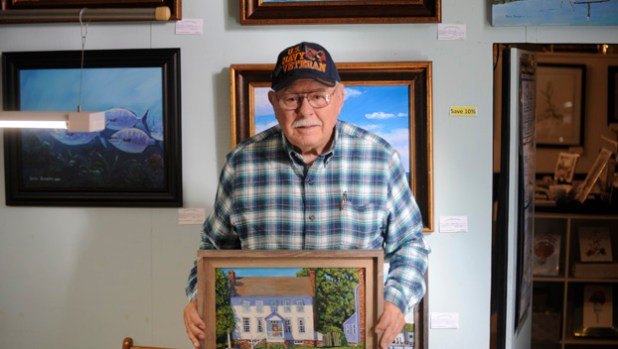 One is a U.S. Navy veteran whose paintings are based in realism. The other is a Virginia native who enjoys repurposing materials — specifically those that were once used in the tobacco production industry — and turning them into works of art.

‘I PAINT WHAT I SEE’

In terms of his art, Spangler is a self-described realist. He enjoys simply painting what he sees on a day-to-day basis — boats, piers, beaches and homes, to name a few of his subjects.

Spangler recently moved to North Carolina after spending nine years in Florida, and all of his life prior to that in Virginia. A self taught-painter who started honing his craft in 1995, the 80-year-old doesn’t plan on stopping anytime soon.

“I’ll do it for as long as I can,” Spangler said

Spangler’s paintings have been displayed at a variety of festivals and shows he’s traveled to throughout the years.

“I was the featured artist at the Norfolk Harbor Fest (in Virginia) in 2008, which means they commissioned me to paint pictures of the tall sailboats that came in,” Spangler recalled. “And then they put it on their T-shirts and their advertising at that time, and that was a real honor.

“Then I was a featured artist at the Daytona Beach Halifax Show,” he added. “The Halifax show is one of the largest shows in Florida. That was a real honor. I’ve done that show for seven years.”
The COVID-19 pandemic took seven shows off of Spangler’s calendar this year, and it has temporarily changed the way he presents his art. He’s used to traveling around to different functions rather than selling his art in a gallery, although Spangler said he is enjoying his break from the physical demands of travelling from show to show.

Spangler frequently explores several different angles when he finds a subject for his paintings.

“I don’t normally do the same painting twice,” Spangler said. “But take a boat, for example. I can paint a boat as it is, and then turn around and paint a picture of the boat’s face, or its other side. It’s the same boat, but just different angles.”

Jim Adams enjoys finding objects and giving them a new life — freshening them up, modifying them in his workshop and putting them together to make works of art.

“What I’m doing right now is working with a lot of found objects and up-cycled materials,” Adams said.

In particular, Adams works with tobacco sticks and other materials that were commonly used in the tobacco industry decades ago. Adams takes those materials and crafts them together with metals he forges, including copper, steel and silver.

“A lot of it is sculpture,” Adams said of his artwork. “I would call it abstract, but they have a real narrative because of the history of the tobacco industry in the region, and the correlation with the rivers and the water. So all of those things are on my mind as I’m working with those materials.”

Adams was born in Virginia, but he grew up on a farm in Indiana. His upbringing has always had a major influence on Adams’ artwork, drawing him to farm-related materials and subjects.

“I’ve always been kind of connected to farming and the history of farming and the culture of farming,” Adams said, “so finding materials that are no longer really usable for that industry and repurposing them for artwork, it connects me back to growing up on the farmland and being a part of that.”

Adams has been living in North Carolina since 1998. He credits his studies at Penland School of Craft in Bakersville for helping him develop “a whole new understanding of art and craft.”