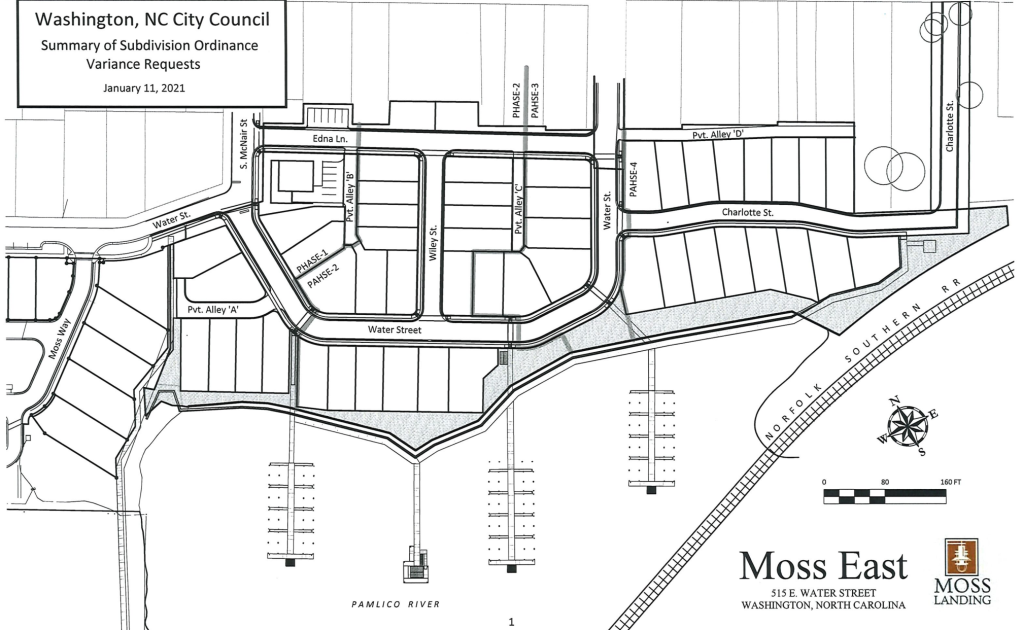 Plans for the second phase of the Moss Landing development are causing some concern about whether there will be a public boardwalk lining the property’s waterfront.

The second phase, Moss East, will be located just east of the Water and McNair Streets intersection, on the 6.75-acre property which Builders FirstSource is set to move out of in February. The plan for the new development includes 49 new single-family homes, a commercial space and a continuation of Water Street.

Beacon Street Development President Jim Wiley presented several subdivision ordinance variation requests during a virtual City Council meeting Monday. Many of those requests involved adjustments to ordinances regarding sidewalk width and design, street width, street network design and various other technical matters. Wiley said those ordinances would help connect Moss East with the surrounding neighborhood and make it an extension of the Historic District, while also opening up the area to public access.

Councilwoman Virginia Finnerty was concerned about the lack of a public boardwalk in the development plans. Finnerty said she and Washington’s late mayor, Mac Hodges, had discussions in the past about extending the boardwalk to include that area.

“I think it’s very important for the City of Washington to have that whole project completed with a boardwalk all the way to Havens Gardens,” Finnerty said.

“We have not contemplated a public boardwalk continuing across the back of this property,” Wiley responded, “nor were we made aware of any understanding that that was a part of a requirement or a plan as we had been working on the property.”

Wiley added that a boardwalk would be “very intrusive” in terms of the plans for the new homes, citing the “narrowness” of the property. The existing Washington boardwalk extends into the water behind Moss Landing.

Finnerty said she wasn’t suggesting that the developer build the boardwalk extension; instead, she wanted to see if the developer would grant an easement for the city to build it. She noted that it would be a project “for the future.”

Wiley said it’s not feasible for the developer to allow that easement, adding that the boardwalk’s close proximity to Moss East would have a “significant financial impact to how we plan the neighborhood.”

The developer is planning to have either a private boardwalk or a grassy area near the Moss East waterline, which will provide homeowners access to the Pamlico River and several boat slips.

City Council eventually agreed to table the matter and plan a work session that will be scheduled for the week of Jan. 25. Council plans to use that time to discuss how to move forward with the Moss East project. Any action items resulting from that meeting will be addressed during the Feb. 8 City Council meeting.

Councilwoman Betsy Kane said this isn’t the first time Washington has given serious thought to extending the boardwalk.

“I just found out today from somebody that, 20 years ago, City Council at that time discussed trying to extend eventually —it was contemplated that the boardwalk would go all the way to Havens Gardens, as far as possible,” Kane said Monday. “I just learned today that there was a sketch made, apparently, by the landscape architect that was working with the city on that idea.

“I don’t know where that sketch is. I’d never heard of it before. But it seems like that’s a long-term vision we should be going after.’

Kane added that input from the public will be critical as Council decides how to proceed.