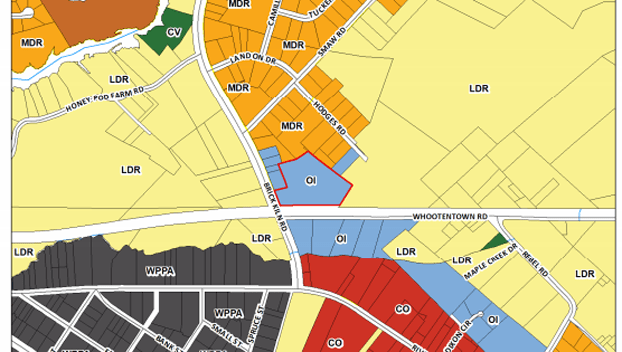 Washington’s future land use plan shows that Steve Fuchs’ most recent rezoning request would have been consistent with the city’s Comprehensive Plan, which was passed in 2013. Fuchs’ property is outlined in red. (City of Washington)

Steve Fuchs’ third attempt at a rezoning request for his 4.98-acre property in Washington ended similarly to the first two, as the Washington City Council on Monday voted 4-1 to accept the planning board’s recommendation to deny the request.

The property, which formerly housed a lumber mill and is currently zoned residential agricultural, is located just northeast of the intersection of Brick Kiln and Whootentown roads. The property sat vacant for decades before Fuchs purchased it in 2018 and cleaned debris from the site, hoping to use the property as an investment. He wanted to have the property rezoned so he could potentially sell it to a developer.

This was the second time Fuchs sought unsuccessfully to have the property rezoned to office and institutional. The first attempt at that change happened in July 2020; prior to that, he tried to have it rezoned to residential in April 2020. Both requests had the unanimous approval of the planning board, but City Council rejected them due to concerns brought forth by community members in public comment sessions regarding drainage concerns on and around the property, as well as concerns about a multi-family housing complex potentially being built on the property.

This time around the planning board recommended that City Council reject Fuchs’ proposal. Fuchs’ attorney noted that the same planning board approved the first two requests.

Mike Weaver, of Pendergraph Management in Raleigh, had presented the second rezoning request to the city. He had an option to purchase the property from Fuchs, and he showed interest in potentially building a commercial development on the property.

Aaron D. Arnette of the New Bern law firm Sumrell Sugg represented Fuchs at Monday’s City Council meeting. In a presentation prior to the vote, Arnette claimed that City Council denied his client’s constitutional right to equal protection in the way they handled the first two requests. Arnette warned that Fuchs would “have no choice but to consider asserting claims against the town for violations of his equal protection rights” if the new request wasn’t approved.

Arnette added that city staff had determined all three requests were in line with the city’s Comprehensive Plan. In a letter he submitted two weeks before the meeting, Arnette argued that the city “failed to articulate any reasoning or rational basis for denying” the requests, and “failed to provide any justification for treating Mr. Fuchs differently from the adjacent and similarly situated property owners whose properties are zoned R15S (residential)” and those who had their properties rezoned to office and institutional in 2003.”

“I respectfully disagree that, (based on) what I understand about this situation, there’s an equal protection claim,” City Attorney Franz Holscher said. ”But they can assert one and we’ll go argue that at a later date.”

Arnette presented two letters in support of the rezoning request, both of them written by individuals who live near Fuchs’ property. In her letter, Jean Ferguson — a longtime resident of Hodges Road — said Fuchs “Should be given a chance to develop the land and be treated fairly….”  In the other letter, Tony Keech Sr., of River Road, said developing the property would mean “additional cleaning up and leveling of the property, bringing in needed fill material, which would fix and drainage problems and provide needed landscape and fencing.”

Dot Moate, a member of the city’s planning board, spoke in favor of the request. Moate said she was unable to log into the video call when the planning board considered the most recent request.

“I see no reason why this should not be approved,” Moate said. “Just because the neighbors may not like the idea of somebody doing something with that property — it’s OK, you can not agree with it, but that is no reason to deny a request…”

Ernest Moore said he lives on a property adjacent to the one Fuchs owns.

“We’ve been here for eight generations,” Moore said. “The people who are opposing it that are living right behind us bought that property to build their home there because they wanted to live in a quiet neighborhood, a single-family dwelling. And that’s what we want.”

Dorian Miller, who spoke out and submitted petitions against Fuchs’ first two requests, expressed her disapproval of the latest request.

“We have drainage issues already,” Miller said. “We have railroad tracks that run right along beside that property.  Everything around it is single-family homes until you get on down River Road or way on down Whootentown Road. Mr. Fuchs bought this property knowing what it was zoned. He bought it as speculation, I assume, figuring it’d be easily rezoned. I don’t know.”

Miller said no one wanted to stop Fuchs from developing the property in accordance with its current zoning; they just want the local area to remain a single-family home neighborhood.